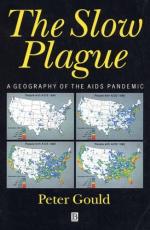 This encyclopedia article consists of approximately 13 pages of information about Aids.

AIDS is the abbreviation for acquired immune deficiency syndrome. The disease is caused by a virus known as the human immunodeficiency virus, or HIV. The disease was first recognized in the United States in 1981.

A person can be infected with HIV without developing AIDS. The virus can remain in a person's body for many years without causing serious health problems. During this period, the virus is said to be latent, or inactive. Eventually, however, most people who are infected with HIV do develop AIDS. Treatment of HIV patients involves trying to slow or stop the virus from spreading in the body's cells and treating or preventing diseases that develop when a person's immune system has been damaged by the virus.

AIDS is considered one of the most serious public health problems in modern history. In 1998 the U.S. Centers for Disease Control and Prevention (CDC) estimated...

More summaries and resources for teaching or studying Aids.