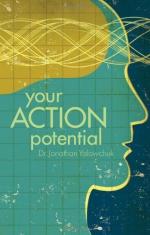 This encyclopedia article consists of approximately 2 pages of information about Action Potential.

An action potential is how neurons—or nerve cells—communicate. Neurons consist of four basic parts: the body (soma), dendrites, axon, and synaptic endings. Surrounding the body of each neuron is a semipermeable membrane which separates fluids inside from fluids outside the cell. These fluids are extremely different in ionic composition, causing the inside of the cell to be negative and the outside positive. In an undisturbed system, the inside is -70 millivolts (mV) in relation to outside. The membrane stores this voltage difference, called the membrane potential. The membrane is selectively permeable to ions, particularly potassium (K+), which is more highly concentrated inside the cell, and sodium (Na+), maintained at a higher concentration outside the cell.

Permeability of the membrane is influenced by three systems: (1) electrical gradient, in which ions move from high charge to low charge; (2) concentration gradient, in which ions move from areas of high concentration to lower concentration; and (3) sodium-potassium pumps, which pump ions through the membrane into or out of the cell. When the resting cell becomes stimulated, sodium ions travel down their electrochemical gradient into the cell, entering through voltage activated gates (special pores in the membrane), the membrane becomes more positive, moving toward zero mV (called depolarization), and reaches its peak value of about +40 or +50 mV, all within a fraction of a millisecond (ms), causing an action potential. Just as quickly, the cell returns to normal and the membrane returns to resting potential. The action potential moves like a wave from the soma along the axon to the synaptic (or terminal) endings. It is at the synapse that the message carried by the action potential is passed to the next cell by neurotransmitters released by the action potential. The next cell is similarly stimulated to produce its own action potential, and information is rapidly transmitted from cell to cell over relatively long distances within the nervous system. An action potential is an all-or-none response, which means that any stimulus which brings the membrane potential to the threshold at which Na+ channels open-- no matter how great or small this stimulus--will produce a full action potential.

More summaries and resources for teaching or studying Action Potential.

Action Potential from Gale. ©2005-2006 Thomson Gale, a part of the Thomson Corporation. All rights reserved.