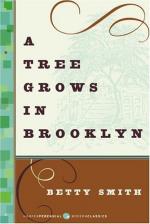 Betty Smith
This encyclopedia article consists of approximately 14 pages of information about A Tree Grows in Brooklyn.

Betty Smith, in the first novel of her career, presents a picture of Brooklyn that she knew well. Like her main character, Francie Nolan, Smith lived in the slums of Williamsburg. In a show of courage and hope, however, both Smith and Francie managed to rise above their surroundings to achieve the dream that originally drew foreigners toward the shores of America.

Brooklyn, New York. In 1898 the New York state legislature expanded the boundaries of New York City, nearly doubling its population overnight. The new area, Greater New York, was divided into five sections known as boroughs. These included Manhattan, Brooklyn, Queens, Richmond, and the Bronx. To some elderly New Yorkers, the new territories seemed so uncharted that they might as well have belonged to a foreign...

A Tree Grows in Brooklyn from Gale. ©2008 Thomson Gale, a part of the Thomson Corporation. All rights reserved.