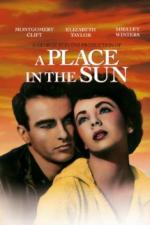 A Place in the Sun - Research Article from St. James Encyclopedia of Popular Culture

George Stevens
This encyclopedia article consists of approximately 1 page of information about A Place in the Sun.

George Stevens won an Oscar for directing this 1951 adaptation of Theodore Dreiser's novel An American Tragedy, de-emphasizing Dreiser's focus on class and social justice and bringing the romantic angle to the story's center. Montgomery Clift stars as a small-town factory foreman who cannot bring himself to break off a love affair with the equally poor Shelley Winters even after falling in love with the wealthy Elizabeth Taylor. When Winters becomes pregnant, Clift contemplates murder, and she in fact drowns when they go for a canoe ride. The naturalistic Clift delivered a sympathetic performance, and his love scenes with Taylor (in one of her first adult roles) were passionate. Winters proved a formidable opponent, as Clift's passive-aggressive ex-lover. A Place in the Sun was both a critical and boxoffice hit; Charles Chaplin considered it the best movie in Hollywood history. It was the second film based on An American Tragedy, a novel Dreiser in turn based upon a 1906 murder case in upstate New York.

More summaries and resources for teaching or studying A Place in the Sun.

A Place in the Sun from Gale. ©2005-2006 Thomson Gale, a part of the Thomson Corporation. All rights reserved.