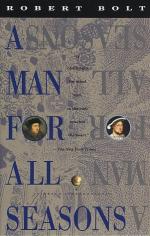 Robert Bolt
This encyclopedia article consists of approximately 14 pages of information about A Man for All Seasons.

Born near Manchester, England, in 1924, Robert Bolt writes about what he calls the human conflict-the struggle between living by one's principles and selling one's soul for earthly rewards. A Man jor All Seasons studies the human tendency to conform rather than to stand for one's principles-and risk being ostracized or even condemned to death. Bolt concentrates on a controversy of the 1500s that dramatically incorporated these choices, which he portrays in the characters of the Common Man and Sir Thomas More.

Henry VIII. In 1509 Henry VIII was crowned King of England after the unexpected death of his brother, Henry VII. By special decree froth Pope Leo X, Henry was allowed to marry his brother's widow, Katherine of Aragon. He eventually sought to have this marriage annulled, however...

A Man for All Seasons from Gale. ©2008 Thomson Gale, a part of the Thomson Corporation. All rights reserved.