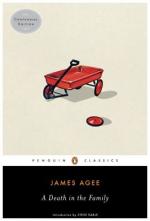 James Agee
This encyclopedia article consists of approximately 13 pages of information about A Death in the Family.

Poet, journalist, film critic, screenwriter, and novelist, James Agee died in 1955 at the age of only forty-nine. He had almost completed his autobiographical novel A Death in the Family after working on it for nearly two decades. Agee had written its ending but not yet finished revising the text by the time of his death. Set in Knoxville, Tennessee, where Agee himself grew up, the novel recreates his childhood experience of his own father's death, providing a closeup view of life in a small American city in the period just before the nation's entry into World War I.

Changing times. The first two decades of the twentieth century ushered in innovative notions that would soon take a central place in American life. While they had begun taking...

A Death in the Family from Gale. ©2008 Thomson Gale, a part of the Thomson Corporation. All rights reserved.