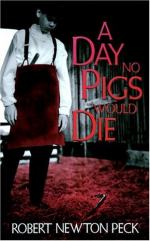 Robert Newton Peck
This encyclopedia article consists of approximately 12 pages of information about A Day No Pigs Would Die.

Robert Newton Peck grew up in a Shaker family on a Vermont farm during the 1930s and 1940s. His father supplemented the family income by working as a pig slaughterer. Peck himself continued to farm in his adult life, viewing his writing as a sideline. Drawing on his own experience as an adolescent and later as an independent farmer, Peck wrote a novel about a boy approaching his teenage years in the sparse context of a Shaker family. Although Peck himself was not born until 1928, he sets A Day No Pigs Would Die in the era of Calvin Coolidge, who was president of the United States between 1923 and 1928.

The 1920s. The decade that followed the end of World War I proved to be enormously...

More summaries and resources for teaching or studying A Day No Pigs Would Die.

A Day No Pigs Would Die from Gale. ©2008 Thomson Gale, a part of the Thomson Corporation. All rights reserved.