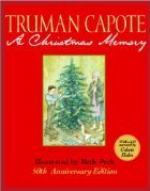 "A Christmas Memory" - Research Article from Literature and Its Times

Truman Capote
This encyclopedia article consists of approximately 11 pages of information about "A Christmas Memory".

Truman Capote, virtually abandoned by his mother as a child, was raised during the Depression of the 1930s by distant cousins in a small Alabama town called Monroeville. He spent the bulk of his time with his favorite cousin, Sook Faulk. Sook exerted a formidable influence on Capote, and her eccentric mannerisms and childlike innocence inspired many of his short stories. Capote's "A Christmas Memory," a short story so renowned that it has been published individually, pays homage to the pleasure and excitement Sock's holiday rituals brought her young cousin.

The South during the Depression. In "A Christmas Memory" the Great Depression has taken its toll; Buddy and his friend fantasize about giving each other the expensive presents that they are too poor to buy. The Depression was precipitated by...

More summaries and resources for teaching or studying "A Christmas Memory".

"A Christmas Memory" from Gale. ©2008 Thomson Gale, a part of the Thomson Corporation. All rights reserved.