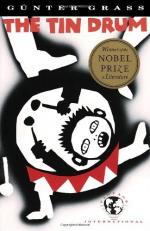 The free The Tin Drum notes include comprehensive information and analysis to help you understand the book. These free notes consist of about 135 pages (40,329 words) and contain the following sections:

These free notes also contain Quotes and Themes & Topics on The Tin Drum by Günter Grass.

The Tin Drum is the fictional autobiography of Oskar Matzerath, who at the time of his writing is thirty years old. He is writing from inside a mental institution in Düsseldorf Germany, the reasons for which remain unknown to the reader until the end of the book. Oskar is, for all intents and purposes, a gnome; when he was a three year-old, he received a toy tin drum from his mother Agnes and decided voluntarily to stop growing, and to never become a grownup. At the same time, he developed a high-pitched singing voice that he could use to break glass - he nurtures this talent and uses it to many ends - defending his drum (which he is never without), breaking and entering, inscribing, and for the effect it has on an audience. As Oskar gets older, the events in his life impel him to grow - at the time of his writing, he measures four feet one inch, and in the middle of writing his book, he grows to four feet two inches.

Oskar's autobiography is also the biography of his family and its history, starting around the turn of the 20th century and extending until after World War II. He begins with his grandparents' generation and relates his story to the present day. His grand parents were Kashubes, a group of people who are neither ethnic Poles nor Germans, but hail from Kashubia, a province in northwest Poland. From them, Oskar inherits an "incendiary spirit." His grandfather Joseph was wanted by the police for setting fire to several sawmills. Oskar's grandmother, Anna, hid Joseph and then married him.

His grandparents moved to Danzig, a Polish port city, where Agnes, Oskar's mother, and Oskar were born. Anna started a family tradition of owning grocery stores and food delivery businesses; the first part of the story revolves around the clique of storeowners in a section of Danzig.

Although Oskar's mother marries a man named Alfred Matzerath, she has a lifelong adulterous love affair with her first cousin, Jan Bronski. Oskar calls both of these men his "presumptive father." Alfred is a card-carrying Nazi, and Jan is a sickly Polish National too weak to pass his army physicals.

Oskar does not go to school, and is self-educated, although he claims to have been borne with all of his intellectual capacities intact. His two great intellectual influences are Rasputin and Goethe. His mother died before World War II began. Oskar weathers the war years in Danzig, which is the first city invaded by Germany in the war. He is present for the invasion of the Polish Post Office, where Jan works. Jan is later executed for his grudging role in the defense of the post office.

With both Agnes and Jan dead, Alfred marries Maria Truczinski, who is Oskar's first love. Alfred marries her because he thinks he got her pregnant, but unbeknownst to either Maria or Alfred, it was Oskar that had impregnated Maria. She gives birth to Oskar's son, Kurt, who spurns Oskar from the day of his birth and will not comply with Oskar's wish for him to be a drum-wielding three-year old like himself.

During the war, Oskar takes up with a performing troupe of midgets like himself, led by his mentor, a midget-clown named Bebra. Oskar performs on his drum and breaks glass with his voice for legions of German soldiers on the front lines during World War II. He falls in love with Roswitha Raguna, an Italian somnambulist and midget like himself, but she is killed by artillery fire during the allied invasion of Normandy. After that, Oskar returns home.

Oskar becomes the leader of a band of anti-establishment youths called The Dusters. He refines their way of doing things and helps them break into government offices. They are finally caught in a church, sawing apart a statue of the Virgin Mary and the baby Jesus, because a sister of one of the members ratted them out.

Alfred, a member of the Nazis, is killed at the end of the war by the invading Russian army. Once Alfred is gone, Oskar, Maria, and Kurt are forced to emigrate to Düsseldorf to be with Maria's sister, Guste. There, Kurt and Maria take up trading on the black market, and Oskar becomes a tombstone engraver. Later, during the tough time of the currency reform after the war, Oskar becomes a model at the academy of art in Düsseldorf. Later, he takes up jazz with his friend Klepp and they put together a jazz band and play at a nightclub called "The Onion Cellar" in Düsseldorf. Once the nightclub owner dies, Oskar is offered a contract to take his drum on the road for solo acts. This leads to a recording deal and makes Oskar rich.

The record company turns out to be owned by Bebra, who becomes close to Oskar and then dies. Oskar stops drumming. Out walking in the fields outside Düsseldorf, Oskar finds the severed ring finger of the woman, a nurse named Sister Dorothea, who had lived across the hall from him in his Düsseldorf apartment and had been murdered. He keeps the finger because he had been in love with her. He then meets another man, Vittlar, with whom he becomes friends. For Vittlar's sake, he asks his friend to turn him in to the police for Sister Dorothea's murder, which Vittlar does. Oskar is put on trial for the murder and is wrongfully convicted and forced to live in a mental hospital, where he writes his memoirs.