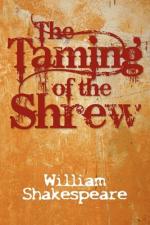 Taming of the Shrew Notes

Taming of the Shrew Notes & Analysis

The free Taming of the Shrew notes include comprehensive information and analysis to help you understand the book. These free notes consist of about 46 pages (13,712 words) and contain the following sections:

These free notes also contain Quotes and Themes & Topics on Taming of the Shrew by William Shakespeare.

Taming of the Shrew Plot Summary

The play opens as the drunkard Christopher Sly is thrown out of a tavern. A wealthy Lord returns from hunting and finds Sly passed out on the street. He dresses him up as a Lord and has his servants and players convince him that he is a lord who has been asleep for nearly fifteen years. He also tells his players to put on a show for this man. The show they perform is about the taming of a shrew.

The play within the play begins as the young noble scholar Lucentio enters a street in Padua with his servant, Tranio. He overhears Hortensio and Gremio discuss their affections for the youngest daughter of nobleman Baptista of Padua. When Lucentio sees the young daughter, Bianca, he also falls in love with her. The problem remains that Bianca is not allowed to marry until her older sister, Kate the shrew, is first married. Finding the task almost impossible, Lucentio and Hortensio both devise plans to woo Bianca. Lucentio changes clothing with Tranio and disguises himself as a schoolteacher named Cambio, so that he may live in Baptista's house and woo Bianca. Tranio will impersonate Lucentio and win her affection from Baptista. Likewise, Hortensio devises a plan that enables him to live in the house as a schoolteacher named Litio.

Petruchio of Verona comes to Padua to visit his old friend, Hortensio, as well as seek a new life and wife. Hortensio tells Petruchio of Kate, the shrew with a large dowry, and convinces him to tame and marry her. Petruchio introduces himself to Baptista as a suitor to Kate and offers Hortensio (dressed as Litio) as a teacher. Tranio (dressed as Lucentio) does the same to Baptista for Bianca's affections, and offers Lucentio (dressed as Cambio) as a teacher. Baptista accepts these teachers and gifts and welcomes the men into his home. He also agrees to give Petruchio Kate's hand in marriage and generous dowry.

Petruchio quickly marries Kate and takes her away to his country home. He is cruel, shrewish, and arrogant toward her and treats her worse than an unnecessary object. He also strikes her, yells at his servants, and strikes them. Because of his unruly behavior, everyone near Petruchio fears for his or her life. Meanwhile, Lucentio has revealed his true identity to Bianca and successfully won her affections. Tranio has made arrangements with Baptista for Lucentio to marry Bianca. Tranio also meets a Pendant on the streets of Padua and convinces him to impersonate Vincentio of Pisa (Lucentio's father) so that the deal of marriage may be completed. He agrees.

As Hortensio, Kate, and Petruchio make their way back to Padua, they come across Vincentio, Lucentio's father. They congratulate him on his son's engagement and bring him back to Padua with them. When Vincentio seeks Lucentio, he finds the Pendant and Tranio. The imposters call Vincentio a madman and a liar and ask that Baptista imprison him. However, when Lucentio appears on the scene, he bows down to his father and all truth is revealed.

The true Vincentio agrees to his son's marriage to Bianca, while Hortensio marries a doting and shrew-like widow when he realizes that he has lost Bianca's affections. Petruchio continues to scold and treat Kate and his servants horrifically.

At the final banquet, celebrating the three nuptials - those of Kate and Petruchio, Bianca and Lucentio, and the widow and Hortensio - the men decide to make a wager. They intend to discover who is the shrewish of the three women. They ask Biondello to send for each of them. When both Bianca and the widow decline their husband's requests, Kate appears before them, obedient and tamed. She proclaims her ultimate loyalty to her husband and intends to live for him forever. As al three couples exit, Hortensio and Lucentio look to Petruchio in awe. He has truly tamed the wild shrew.

More summaries and resources for teaching or studying Taming of the Shrew.

Taming of the Shrew from BookRags. (c)2020 BookRags, Inc. All rights reserved.