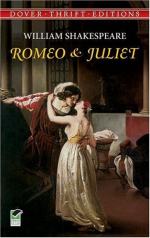 The free Romeo and Juliet notes include comprehensive information and analysis to help you understand the book. These free notes consist of about 34 pages (9,900 words) and contain the following sections:

These free notes also contain Quotes and Themes & Topics on Romeo and Juliet by William Shakespeare.

For many years, an on-going feud between two families has caused much disruption in the city of Verona, Italy. The Capulets and the Montagues cannot seem to get along, and there have been many deaths among the two families because of it. Prince Escalus of Verona warns the two families that if the feud does not stop, the punishment will be death.

The stage opens with servants of the Capulet and Montague families. They get into a minor argument. Romeo, a Montague, enters the stage. He has recently been denied the love of Rosaline. He is miserable over this. His friend and cousin, Benvolio, enters and decides that they will go to the Capulet feast, in disguises, so he can prove to Romeo that other pretty women exist. They all exit. At the feast, Romeo meets Juliet, the daughter of Capulet. Instantly, they fall in love. After the feast, Romeo sneaks into the Capulet orchard and visits Juliet. Here, they proclaim their love for each other. They decide to marry the next afternoon and they exit the stage. Romeo and his friend and confidant, Friar Laurence, enter. Romeo seeks the help of Friar Laurence, who agrees to marry Romeo and Juliet, in hopes that the marriage will end the feud between the two families. They exit.

Later that afternoon, Tybalt, a nephew of Lady Capulet, enters. He meets Romeo and starts a fight with him, as he is angry that Romeo was at the Capulet feast. Mercutio, a friend of Romeo's, is angered by Tybalt and challenges him to a duel. Tybalt kills Mercutio, and Romeo in response, kills Tybalt. He quickly flees the scene before he hears that the Prince has exiled him from Verona. All exit.

Romeo and the friar enter. Hiding in Friar Laurence's cell, Romeo tries to commit suicide. The friar will not allow Romeo to take his own life, and convinces him to go and see Juliet to say goodbye to her.

Capulet enters and arranges for Juliet to marry Paris in three days. She refuses, but her father says he will disown her if she does not comply. They exit and Juliet enters in the friar's cell. He gives her a potion that will make it appear as though she is dead. She exits. She reenters the stage (now at home) and agrees to marry Paris. Her father is so delighted with her obedience that he decides to move the wedding up one day, to the very next day (Wednesday). All exit. The next morning, Nurse enters and finds Juliet in her bed, apparently dead. The Capulets all enter with Paris and decide to have a funeral. All exit. Romeo, who is in Mantua, enters. His servant Balthasar enters and tells Romeo that Juliet is dead. Balthasar exits. Romeo doesn't know that it is a fake death because he never gets the message from the friar. He buys a vial of poison from an apothecary and returns to Verona.

Romeo enters at the Capulet tomb and sees Juliet (apparently) dead. Paris, who had entered previously, but had been hiding, recognizes Romeo as a Montague and challenges him. Romeo kills him, drinks the poison he bought, and dies. Just as Juliet wakes up from the potion the friar gave her, the friar enters the tomb. He hears noises and tries to persuade Juliet to leave with him. She refuses, sees Romeo dead next to her, stabs herself with Romeo's sword, and dies. The Capulets, Montagues, and the Prince of Verona all enter the tomb and wonder what went on. Friar Laurence explains the story, and the Capulets and Montagues agree to end their family feud.