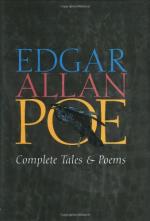 The free Stories of Edgar Allan Poe notes include comprehensive information and analysis to help you understand the book. These free notes consist of about 264 pages (78,994 words) and contain the following sections:

The varied stories of Edgar Allan Poe clearly reveal the complexity of the man who created them. Popularly known for such poems as "The Raven" or 'The Bells," Poe's primary source of income was from selling his stories for publication. Although the 18 Best Short Stories by Edgar Allan Poe, edited by Vincent Price and Chandler Brossard, does not include all of these tales, it includes a strong overview of those for which Poe was best known. Generally, Poe himself grouped his stories into two categories, that of the surreal, the supernatural, which he termed to be "arabesque," and the horrific, gruesome tales which he entitled "grotesque," as when he published his Tales of the Grotesque and Arabesque in 1840.

Poe's extensive work was the forerunner for much of the literature that was to follow, writing science fiction before Jules Verne, or composing the first detective stories featuring the infinitely observant Dupin, before Doyle's Sherlock Holmes or Agatha Christie's Hercule Poirot. As with Poe, the narrator of these later stories is the "sidekick" of the brilliant detective mind. Poe's satire in "The Gold-Bug" or "The Man That Was Used Up" comes before another famous southern gentleman who came to live in the North, Mark Twain. He is also known for further defining the genre of "horror" that had already been established with the European Gothic literature of Mary Shelley and others, as Poe does in "The Pit and the Pendulum" or "The Fall of the House of Usher."

However, these term denote a certain literary style or tone and do not explicitly reveal the far-ranging ideas that his tales pursue. Some focus upon death, as in "The Fall of the House of Usher," "The Masque of the Red Death," "The Tell-Tale Heart," or "The Premature Burial." Several tales focus upon crime or acts of murder, "The Black Cat," "The Tell-Tale Heart," or "The Cask of Amontillado," while Poe focuses on the process of solving a crime in "The Murders in the Rue Morgue" and "The Purloined Letter." Characters are often portrayed as being in a vicious struggle to escape death as depicted in "The Facts in the Case of M. Valdemar," "The Sphinx," "A Descent into the Maelstrom," or "The Pit and the Pendulum." This quest for survival succeeds in some instances and fails in others. Then there are the more whimsical tales that tend to amuse and sometimes satirized popular figures of Poe's day. Some may find such comical stories as "The Gold-Bug," "The System of Dr. Tarr and Prof. Fether," and "The Man That Was Used Up" to be completely uncharacteristic for the Gothic horror tales for which Poe is commonly known. In spite of this common perception, these stories form yet another facet of Poe's complicated personality.

In regard to format, the stories always reflect a keen attention to details, bringing together every event at the story's conclusion and leaving no question intentionally unanswered. In tales such as "MS Found in a Bottle," the ending remains unknown and is left to be determined by the reader's own imagination. This use of flavorful details to illustrate a certain setting, such as that of Sullivan's Island for "The Gold-Bug," or the Shenandoah River Valley for "A Tale of the Ragged Mountains" reflects the use of "local color," a technique instituted increasingly by many authors in Poe's generation of authors. The narration is always first person, with the narrator himself sometimes being the focus of events, as in "The Black Cat," but often the narrator is merely an impartial observer, merely recording the words of the main storyteller, as in "The Purloined Letter," where Dupin is the center of attention. Sometimes the format purports to be a mere short story, while Poe employs more engaging scenarios ranging from the text being a letter found in a bottle, as in "MS Found in a Bottle," a newspaper report in "The Balloon-Hoax," or a murderer's confession composed on the eve of his execution, as in "The Black Cat."

Poe's general modus operandi was to meld together facts with fiction. Those facts are derived from current events, history, or personal experiences in Poe's life. Such examples can easily be found throughout these eighteen stories and are extensively documented throughout the main text, and so elaborate detail shall be omitted here. However, his lifelong struggle for a female figure in his life manifests itself in several stories, as does the impending sense of death that overcomes many characters, because Poe himself had lost so many important people from his own life that included his mother, stepmother, and his wife, Virginia Poe. The stories also reveal a sharp wit, embodied in such complicated characters as Auguste Dupin, the quiet genius who has fallen from prestige and only regains it by using his acute powers of observation. In many ways, Dupin models Poe's own personality, aware of the importance of every discernible detail in his own stories. Simultaneously, Poe is also the drunk from "The Black Cat" and "The Masque of the Red Death," reveling to escape from more pressing realities. Poe is the man who lives in fear like the narrator of "The Premature Burial" but has discovered renewed hope to live.

A man of intense emotion, the innermost recesses of Edgar Allan Poe's soul are clearly visible through the varied emotional states of these characters. They explore all facets of humanity, ranging from the intellectual, the spiritual, and the physical. Some stories have a greater personal significance than others, which were written for commercial purposes. However, it is Poe's entire life that is pulsing between the words, revealing his dreams and his failures, his loves and his regrets, the people and places whom he encountered during his journey through the first half of nineteenth century America. As much as this multitude of characters is entirely a product of Poe, so too is he a subconscious product of each of them. Thus, this last, surviving piece of Edgar Allan Poe is reborn while these stories are still being read, and his world is reawakened in full force. It is then that one can again hear the pounding voice of Poe's very own tell-tale heart.

Finally, although the arrangement of the tales throughout the text is not chronologically presented, it is important to note the parallel between the story's theme and events occurring in Poe's personal life, as well as in society, when the work was composed. It will be useful in better understanding the inspiration behind each of these works to order them according to publication date which presumably would follow near the date of composition. The proper chronological list reads thus:

More summaries and resources for teaching or studying Stories of Edgar Allan Poe.