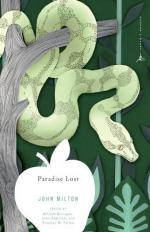 The free Paradise Lost notes include comprehensive information and analysis to help you understand the book. These free notes consist of about 36 pages (10,597 words) and contain the following sections:

Paradise Lost is John Milton's elaboration of Genesis into an epic poem. The poem begins with Milton's invocation to a muse for help. The action switches to hell, where Satan and his followers have been banished from heaven after trying to rebel against God. Bitter, they try to make the best of things by building the palace Pandemonium, all the while plotting whether to get revenge against God by war or trickery.

After much debate, they finally decide to try to sabotage the new world of earth and mortal man that God has created. Satan sets off for earth, and meets his offspring, Sin and Death, at the gate of hell. They let him pass, and he journeys onward. Meanwhile, God sees Satan approaching earth and predicts the fall of man. When no one else does, God's Son offers to sacrifice himself to save man.

Satan flies to the sun, where he tricks Archangel Uriel into leading him to Paradise. Satan finds Adam and Eve there and becomes jealous of their happiness. He hears Adam telling Eve that they mustn't eat the fruit from the forbidden Tree of Knowledge. Meanwhile, Uriel warns Gabriel and some other Archangels that one of the fallen angels has entered Paradise. Satan is caught in the shape of a toad trying to whisper to Eve in her sleep and is thrown out of Eden. God eventually tells Raphael, another Archangel, to go warn Adam and Eve about Satan, and remind them that they have the power of free will to determine their fate. Raphael tells Adam and Eve all about Satan and his rebellion, and how God's Son threw them into hell. He speaks of a time when heaven and earth could become one, and leaves Adam and Eve with a final warning.

Unfortunately, Satan hasn't been sufficiently deterred and returns to Paradise as a mist. He then inhabits a serpent. He is thrilled to find Eve all by herself and convinces her that she should eat from the Tree of Knowledge since it only made him "more perfect" and could make her a goddess. Adam, distraught at Eve's mistake, debates what he should do until he finally eats from the tree and joins whatever fate awaits Eve. Adam and Eve become lustful, then hostile toward each other, and finally see shame in their nakedness. God's Son comes to earth and tells them they will not die right away, but gives them punishments such as painful childbirth and hard labor in the fields.

Meanwhile, Sin and Death know that Satan has succeeded and build a pathway for his speedy access between hell and earth. Satan comes back to hell expecting celebration, but he and his followers are turned into serpents and tormented by a copy of the Tree of Knowledge, which turns to ashes instead of bearing real fruit. Back on earth, Adam and Eve finally make amends. God sends Archangel Michael to send them out of Paradise, but first Michael shows Adam visions about other unfortunate events that will arise from his disobedience. Adam is sad at first, but cheers up when he knows God's Son will someday reward the righteous and punish the sinners. Finally, Adam and Eve sadly leave Paradise hand in hand, awaiting their future.