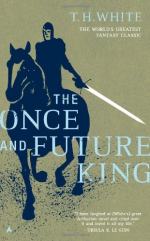 Book 1, Chapter 21 Notes from The Once and Future King

The Once and Future King Book 1, Chapter 21

Kay is about to be knighted, and Arthur is unhappy but trying not to show it. He goes to see Merlyn, who tells him, "The best thing for being sad is to learn something." Book 1, Chapter 21, pg. 186 He says that will cure anything. He tells him that he should learn about the animals of the earth, and that aside from Archimedes, the badger is the most knowledgeable creature he knows of, so he turns Arthur into one. First, though, he tells him that this will be the last time he can turn Arthur into anything: once Kay becomes a knight, Merlyn must leave Arthur. As a badger, Arthur walks around, very unhappy about having to be a squire and Merlyn's leaving. Badgers are vicious and fierce and very tough, so this makes Arthur feel a little better. He meets a hedgehog, which he decides to mercilessly devour. The creature, however, curls up tightly and sings to Arthur in such a pitiful way that Arthur cannot eat him. He asks him where he learned to sing. He learns that Merlyn raised the hedgehog, and begs him to uncurl and talk to him. But the hedgehog doesn't trust badgers, and refuses to uncurl. Arthur finally leaves him alone, telling him that he has cheered him up immensely by being so charming.

When Arthur meets him, Badger tells him that the only two things he can teach Arthur are to dig and to love his home. He shows Arthur around his house, which is clean and well-kept. He sits down with Arthur and they talk about learning. Arthur says, "I can bear a good deal of learning if it is about natural history." Book 1, Chapter 21, pg. 192 The Badger tells him that he has recently written a paper about how Man came to be the leader of the animals, and describes it to Arthur. He tells him the story of how God created all the animals. God gave them each a choice of what tools they would like-for example, badgers asked for their skins to be tough shields, for their mouths to be weapons, and for their arms to be strong tools to dig with. But Man asked for nothing: Man only wanted to be able to use homemade tools, but to be defenseless without them. God was pleased by this, and made Man the master of all the other animals. Still, the Badger does not think that Man is really the luckiest of all the animals, because Man is one of the very few that makes war on its own kind. Arthur protests that war sometimes brings good things: bravery, and good friendship between soldiers, and endurance. Badger thinks for a moment, then simply asks him, "Which did you like best, the ants or the wild geese?" Book 1, Chapter 21, pg. 196