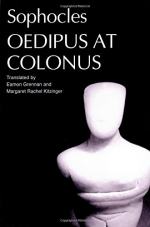 The free Oedipus at Colonus notes include comprehensive information and analysis to help you understand the book. These free notes consist of about 47 pages (13,931 words) and contain the following sections:

These free notes also contain Quotes and Themes & Topics on Oedipus at Colonus by Sophocles.

Blind, old Oedipus, a former king of Thebes, wanders for many years guided by his daughter, Antigone. Although once successful as a ruler, he was exiled after the gods sent sickness to the city because Oedipus had killed his father Laius, the prior king, and he committed incest with his mother, Jocasta, after he becoming king of Thebes. Now he and Antigone end their journey near the Greek city-state of Athens at a place called Colonus. There, Oedipus offends the Eumenides -- goddesses of the underworld -- and he must make offerings later to avoid punishment. His youngest daughter, Ismene, joins them at Colonus, bearing news from Thebes that her brothers are fighting over the kingship and that the younger Eteocles exiled his older brother Polyneices from the city.

Oedipus is stunned to hear this, but she also reveals the oracle's prediction that the each of the sons will soon seek Oedipus' support to win the battle for the throne. Disgusted, he refuses to help either of them because Theban citizens had treated him so poorly before. He asks for the help of Theseus, King of Athens, to protect him and his daughters, and the wise king agrees. Later, Creon, Jocasta's brother, finds Oedipus at Colonus and kidnaps his daughters to force Oedipus to return to Thebes, so that the younger Eteocles can win the war. Thankfully, Theseus comes to the rescue by retrieving the two girls and sending Creon back to Thebes empty-handed. Next, the exiled older son Polyneices comes seeking Oedipus' support, yet the old man is angered at his son's request and condemns both of his sons to death because they are so selfish.

After praising the Athenians for their kindness, thunder in the sky summons Oedipus into the wilderness to die. Accompanied by his children and King Theseus, he walks off toward death, declaring that Athens will forever be protected by the gods as long as Theseus does not reveal the location of his grave to anyone. Oedipus thus dies after a long life filled with suffering that is cured only by forgiveness and acknowledging the supremacy of the gods. Because of his return to faith, he is absolved from the crimes he committed so many years before. After their father's death, Antigone and Ismene return to Thebes, hoping to prevent the deaths of their two brothers that Oedipus had predicted.

Overall, the story of Oedipus at Colonus is about opposites: how a good ruler should behave compared to a poor ruler, how a good city should be compared to a bad city, and how the gods should be worshiped compared to how they should not. After leaving these negatives behind while seeing the fine example of Athens as a model city, Oedipus finally discovers inner peace. However, the suffering of his children shall only continue as the daughters try to stop their brothers' unsuccessful battle for the Theban throne.

More summaries and resources for teaching or studying Oedipus at Colonus.