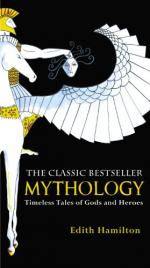 The free Mythology notes include comprehensive information and analysis to help you understand the book. These free notes consist of about 85 pages (25,368 words) and contain the following sections:

There are twelve Olympians, of whom Zeus is the most powerful. Besides the twelve Olympians, Demeter and Dionysios, the gods of wheat and wine, have a significant impact on the daily lives of mortals. The world was created from Chaos. The Titans, the first gods, were born from the union of earth and sky. Cronus, the lead Titan, overthrew the sky and was eventually overthrown by his son Zeus. Men were created and given fire to protect themselves from all the dangers of the world. Men and gods had many sordid love affairs between each other. Oedipus went down to the underworld to retrieve his lost wife, only to lose her. Pyramus and Thisbe both killed themselves on the outskirts of their town because of a misunderstanding.

The first great journey of men was the Quest for the Golden Fleece. In order to regain his kingdom, Jason led a band of heroes across the Aegean to claim the fabled fleece. Around this time, another hero named Bellerophon gained the friendship of the winged horse Pegasus and Phaethon died trying to drive the chariot of the sun.

The great heroes before the Trojan War were Perseus, Theseus and Hercules. Perseus was sent away by his grandfather as an infant. With the help of the gods, he killed the terrible gorgon Medusa, but accidentally killed his grandfather. Theseus freed the world from the horrors of the Minotaur with the help of Ariadne, and brought democracy to Athens. Hercules, after killing his family in a fit of rage, was cursed to perform twelve impossible labors. Eventually, he was killed and was deified because of his great feats of strength and courage. In the time of these heroes, there was also Atalanta, a woman who could out hunt and out run any man in the world. She was only finally beaten in a foot race, but only after she had been tricked.

The Trojan War began as a conflict between Hera, Aphrodite, and Athena over who was the most beautiful. It escalated into full war and the armies of Greece set sail for Troy. There they fought and the two opposing heroes, Achilles and Hector died. Odysseus, a Greek King, took ten years to get home from Troy and his journey was as dangerous as it was long. From Troy, a man named Aeneas led refugees to Italy where he laid the foundation of the Roman Empire.

Agamemnon, one of the leaders of the Greek armies at Troy, was a member of the house of Atreus. This royal house was cursed. Family members killed their children and fed them to the gods and other members of the family. The Royal house of Thebes was also blighted. Oedipus killed his father and married his mother. When he realized this, he blinded himself. In Athens, the royal family was not quite as doomed, but their fates were also dismal. The first King was half dragon and half man.

There are many other myths. Midas wanted everything he touched to turn to gold. Leto was the mother of Apollo and Artemis, who was abandoned by her husband. She wandered over the earth until she found an island to settle. Orion was a giant full of lust who was changed into a constellation.

Norse mythology is different than Greek mythology, although they share many common themes. The world of the Norse was dominated by the notion that the world was ultimately going to end and all man and god could do was delay it.