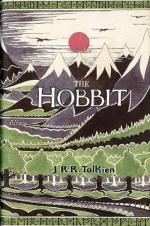 The free The Hobbit notes include comprehensive information and analysis to help you understand the book. These free notes consist of about 77 pages (22,997 words) and contain the following sections:

Bilbo, a simple hobbit, is smoking his pipe one day when the wizard Gandalf appears and asks him to go on an adventure. He is confused and tells the wizard to come back the next day. The wizard does show up the next day, but only after thirteen dwarves have knocked at his door first. Bilbo is very frustrated by this, but he acts the part of the gracious host. The dwarves eat, speaking of their imminent journey to an old home beneath Lonely Mountain. Long ago, a dragon named Smaug chased their forefathers from the mountain and stole their treasure. The group now wants Bilbo to come along as their thief.

Bilbo wakes late the next morning, and is hurried along by Gandalf to join his fellow travelers. They begin their journey. Before long, they have gone further from Hobbiton than Bilbo ever has before. One night, Gandalf disappears and they cannot make a fire because it is too wet and cold. However, they see a fire in the distance. Thorin, the leader of the dwarves, sends Bilbo ahead to investigate. There are three trolls eating mutton around a fire. Bilbo tries to pick a pocket but is captured. Soon, all of the dwarves are captured. Gandalf returns and causes trouble between the trolls, until the suns rises and the trolls turn to stone.

The party travels for a while and arrives at a magical place called Rivendell. They stay here for a while and get fresh supplies. They leave and enter the mountains. Their path is dangerous and it begins to rain very hard. They take shelter in a cave and fall asleep. Bilbo wakes to see the ponies being stolen. They are all grabbed by goblins, except for Gandalf, who makes himself disappear. In the great hall of the goblins, Gandalf reappears and kills the chief goblin right before the dwarves are to be killed. The party flees into the tunnels. Bilbo is dropped and is knocked out in the darkness. When he wakes, he finds a ring and wanders until he runs into a creature named Gollum. Gollum challenges him to a riddle contest, and Bilbo wins. Bilbo realizes that the ring is Gollum's lost ring, and it makes him invisible. Gollum thinks Bilbo stole his ring, so he runs out of the caves to find Bilbo, while the invisible Bilbo actually follows Gollum out of the caves. Bilbo is reunited with his friends on the outside, but he doesn't tell them about the ring.

The party travels further, until they are forced to climb up trees to escape giant wolves. They cannot fight them off and are in more danger when goblins arrive. Giant eagles notice the scene, and rescue the travelers. They take them near a dark forest called Mirkwood. Here, they stay with a man named Beorn who helps them by providing them with food and ponies. When they get to the edge of the forest, however, they must send the ponies back. Gandalf does not enter the forest with them.

The forest is dark and terrible. One of the dwarves falls into a stream that makes him fall asleep. They have to carry him. After many days, they are near the end of their food and they leave the path, against Gandalf's advice, when they see lights in the trees. Giant spiders capture them but Bilbo escapes and helps his friends escape. He reveals to them the secret of the ring and they get away from the spiders.

Thorin is missing. He was captured by wood-elves. Soon, the rest of the group, except for Bilbo, is captured also. Bilbo spends weeks wandering through the wood-elves' home invisible, and he comes up with a plan. The dwarves escape in empty wine barrels tossed into a river. In this fashion, they float all the way to Esgaroth, the last town before their destination.

In Esgaroth, they are treated like royalty, and after a week, they set off towards the mountain. When they get there, they search for the secret entrance and find it after a lot of trouble. They cannot open the gate, until days later, when they discover the hidden keyhole. Bilbo enters the dragon's lair, and steals a golden cup for them. Smaug, the dragon, wakes and kills their ponies. Bilbo reenters the lair and has a conversation with the dragon; he discovers that the dragon has a weak spot over its left breast. The dragon attacks them, but cannot reach them because they've closed themselves in the narrow tunnel. Smaug goes off to destroy the nearby town of Esgaroth.

In Esgaroth, the dragon destroys the town but is killed by a man named Bard, who was told of its weak point by the thrush from the mountain. The men begin to rebuild their city, but some of them join a passing elf army in search of Smaug's treasure.

The dwarves are informed of the coming armies by a raven, and they decide to fortify the mountain and send a bird to Thorin's cousin. When the armies arrive, Thorin refuses to compromise. Bilbo steals a valuable stone and gives it to the armies as a means of bargaining, but Thorin will not bargain. His cousin arrives with an army of dwarves and the sides prepare to fight, until Gandalf stands between them to warn that a great army of goblins is soon to arrive. The armies fight the goblins, and would have lost, if an army of eagles and a man in the form of a bear, named Beorn, had not helped them. Thorin dies, and asks for Bilbo's forgiveness. Bilbo heads home with Gandalf and Beorn.

After a very long journey, Bilbo makes it home to find his stuff being auctioned off. He gets most of his things back and settles down again, happy to be living a simple life after so long a tale.

The Hobbit from BookRags. (c)2022 BookRags, Inc. All rights reserved.