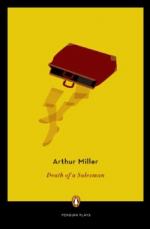 Death of a Salesman Notes

Death of a Salesman Notes & Analysis

The free Death of a Salesman notes include comprehensive information and analysis to help you understand the book. These free notes consist of about 63 pages (18,788 words) and contain the following sections:

These free notes also contain Quotes and Themes & Topics on Death of a Salesman by Arthur Miller.

Death of a Salesman Plot Summary

Willy Loman, a sixty-year-old traveling salesman, is having trouble lately because he can't seem to keep his mind on the present. He keeps drifting back and forth between reality and memory, looking for exactly where his life went wrong. Having been demoted to a strictly commissions salesman, as he was in the beginning of his career, Willy begins to wonder what missed opportunity or wrong turn led his life to this dismal existence. Willy always believed that being well liked was the key to success -- it's not what you know, it's who you know. But now, as he nears the end of his life, he realizes that the only things you can count on are the things you can touch. You can't touch appointments and half-hearted sentiments. This was something that his brother, Ben, a man independently wealthy by the age of twenty-one, tried to tell him years ago. Despite this, Willy insisted that his success would come from being well liked.

Throughout his life, Willy attempted to show his sons the keys to success and to prepare them, or at least Biff, his oldest son, for excellence in the business world. Willy pretended to be an important, respected, and successful salesman to win the love and respect of his family (and himself in some ways). He even started believing that he was as important as he convinced the boys he was; whenever he couldn't live up to that expectation, and reality contradicted the image he tried to put forth, his whole life began to crumble. He realizes that he is a failure and he has wasted his life. Not only that, but he has taught his sons the wrong things. Now Biff is a bum who can't hold a job anywhere but in the West as a farmhand, and Hap is a philandering assistant's assistant who is just as deluded about his importance as Willy. Willy taught his sons the wrong things, and now their lives are mediocre because of it.

Willy and Biff, although close when Biff was younger, are always at odds because Biff hasn't lived up to Willy's great expectations for him. Biff was never given the proper direction to fulfill these expectations. Willy encouraged him only to be well liked and popular; Biff learned he never had to work for anything or take orders from anyone, and as a result, he couldn't keep a job in the business world. Willy even encouraged his boys to steal: another reason Biff couldn't hold a job, because he kept getting in trouble for stealing. Integrity was never an emphasized characteristic in the Loman house. Now Biff has come home and he realizes that he's just an ordinary guy who was meant for a life outside the business world. He is happy only when he is honest with himself. This realization prompts an entire overhaul of the values taught to him by his father, and Biff wants to expose the lies Willy has been telling for years. Willy won't have it. After a series of long arguments, Biff decides it's best if he leaves for good; he will never fulfill his father's dreams, nor will he convince Willy to confront reality.

Willy, now unemployed and completely broken down, decides that he must do something magnificent to prove to Biff his life wasn't useless and completely wasted. Feeling he will be of greater value dead, he kills himself so that Biff can use the insurance money to start his own business. His son will consider his father a hero, and appreciate the sacrifice that he made for his son. He also wants to prove that his importance and success as a salesman was not fake, expecting a grand funeral attended by many buyers in New England (similar to the funeral of Dave Singleman). It doesn't work out that way. The insurance doesn't cover suicide and only Willy's family and their two neighbors attend the funeral. In the end, Willy's legacy is one of a broken man, whose life had become a sad failure.