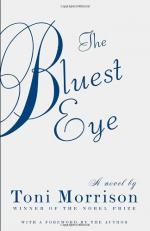 The free The Bluest Eye notes include comprehensive information and analysis to help you understand the book. These free notes consist of about 48 pages (14,112 words) and contain the following sections:

These free notes also contain Quotes and Themes & Topics on The Bluest Eye by Toni Morrison.

Her memories go back to the fall of 1940 (one year before the marigolds did not bloom). Claudia and her older sister, Frieda, live in a home that takes in borders. Mr. Henry moves in and flatters the young girls by telling them they look like Ginger Rogers and Greta Garbo. Soon after that, a young girl named Pecola moves in with them, as ordered by the county. She will live there until the county can find a better home for her, as her father, Cholly, burnt down her old home. Pecola and the two girls become friends and go through many experiences together, including Pecola getting her first period.

Pecola's family background is then described. Her parents, Pauline and Cholly Breedlove, have a bad marriage. Her mother is always working hard and nagging Cholly, while Cholly is always coming home drunk and beating Pauline. They yell and fight, and Pecola and her brother, Sammy, each look for an escape in their own ways. Sammy will frequently run away to get away from his family. Pecola meanwhile, prays that her eyes will turn into a beautiful blue color. She thinks that if her eyes were blue, things would be different - they would be pretty, and more than that, she would be pretty. Pecola becomes obsessed in her quest for blue eyes.

Winter arrives and Claudia tells of a new girl, named Maureen Peal, who comes to their school. Maureen is revered for her "white" looks. She has long hair, green eyes, light skin, and nice clothes. She is very popular with teachers and other classmates. However, Claudia is disgusted with her. Claudia is very turned off from the part of her culture that seems to favor "white" things, or things that resemble white people. Pecola, on the other hand, is obsessed with white ways, and wants to look white herself. She wishes she had blonde hair and blue eyes, and is frequently found admiring Shirley Temple's picture on the cups in Claudia's house.

The next section describes Geraldine, her son Junior, and their blue-eyed black cat. Junior has Pecola come over one day. He meanly throws the cat on Pecola and it scratches her. Pecola goes to leave Junior's house, but he does not let her. The cat rubs against her leg and she is taken with its beautiful blue eyes. Junior then takes the cat and starts swinging it around. Pecola goes to save the cat by grabbing Junior, but Junior throws the cat and it lands against the window. Geraldine walks in and Junior blames the cat's death on poor Pecola.

Spring arrives and Claudia tells of how Mr. Henry touched Frieda's breasts and then was beaten by their father. The two girls go to visit Pecola in her new house, a downstairs apartment. Above, there are three prostitutes, Marie, China, and Poland, whom Pecola often visits and talks with.

Pauline Breedlove's younger years are described. It explains how she would often go to the movies, and because of this eventually became fascinated with Hollywood ideals of beauty. She saw famous movie stars like Jean Harlow as true representations of beauty, and anything straying from that was not deemed beautiful. She even thought her own daughter, Pecola, was ugly. This is why Pauline treated the daughter of the people she worked for, the Fishers, like she was her own daughter. She had blonde curls and blue eyes, and Pauline became absorbed with their white lifestyle. It was the closest she could get to having it herself.

Cholly Breedlove's background is then explained. He is abandoned by his mother and father and is raised by his great Aunt Jimmy, who later dies. Cholly has his first sexual experience with Darlene. They are caught in the woods by two white men and Cholly is humiliated. He thinks Darlene might be pregnant so he runs away to Macon, Georgia to try and find his real father. He finds him, but discovers that his father is a drunk and a gambler who wants nothing to do with Cholly. Cholly runs to Kentucky where he meets and marries Pauline. They eventually have two children, Sammy and Pecola.

The rape of Pecola by her father is then described. Cholly comes home drunk one afternoon and sees Pecola in the kitchen washing dishes. She reminds him for a moment of his wife, Pauline, and in a fit of confusion and love, he rapes his daughter. He leaves her on the kitchen floor feeling ashamed and alone.

The character of Elihue Micah Whitcomb (Soaphead Church) is introduced. He is a psychic healer of sorts, who hates people. He comes from a racially mixed family; he is part white and part Chinese, which accounts for his attitude of superiority over others. Pecola visits him one day, and asks him to make her wish come true of having blue eyes. He tricks her into poisoning an old, sick dog that he hates. He tells Pecola that if the dog behaves strangely, then that was a sign from God that her eyes would turn blue the next day. After Pecola feeds the dog the strange meat (which had poison on it), she sees that the dog chokes, falls down and dies. Horrified, she runs out of the house.

Summer comes and Claudia tells of how she and Frieda learned from rumors and gossip that Pecola was pregnant by her father. Claudia feels so badly for Pecola that she decides to not sell the marigold seeds she was planning on selling for money for a bicycle. Instead, she and Frieda bury the seeds and say that if the marigolds bloom, then everything would be fine. And if not, then things would be bad.

Pecola is left to talk to her only friend, an imaginary friend about the new blue eyes that she thinks she now has. She is only concerned that they are the bluest eyes in the world. She has driven herself into a state of madness over these blue eyes, and she is all alone. Claudia says that she saw Pecola after the baby was born and then died. Pecola walks up and down the street flapping her arms, as if she was a bird that could not fly. Pauline still works for white folks, Sammy ran away, and Cholly died in a workhouse. Claudia finally says that the marigolds did not bloom because some soil is just not meant for certain flowers.