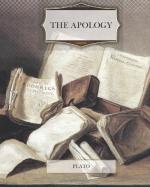 The free The Apology notes include comprehensive information and analysis to help you understand the book. These free notes consist of about 32 pages (9,362 words) and contain the following sections:

These free notes also contain Quotes and Themes & Topics on The Apology by Plato.

Socrates is being prosecuted for three claims: inquiring into things below the earth and in the sky, making the weaker argument defeat the stronger, and teaching others for a fee. He begins his defense by saying that his prosecutors are lying, and that he will prove it. Then, he asks the jury to allow him to speak in the same manner as he speaks in the marketplace. He is unfamiliar with the court manner of speech as he is seventy and has never been to court in his life yet. Thus, he asks not to be judged on his manner of speech, but instead on whether his cause is just or unjust.

As he has many critics, he decides to defend himself chronologically, and attempt to rid the jury of the false impressions his prosecutors have made of him. They accused him of being a physical philosopher, a sophist, and a professional teacher. However, he is sure that the jury wants to know how he gained such a reputation if he only went about regular activities. He claims that his childhood friend, Chaerophon, went to an oracle and asked if there was anybody wiser than Socrates and the oracle said that there wasn't. Socrates didn't believe this and went out to see the hidden meaning in this, as the oracle could not be lying.

To this end, he interviewed many people, politicians, poets and craftsmen, who were known, and claimed, to be wise. In interviewing all these people, he came to the conclusion that none were wise, and that the greater the reputation they had for being wise, the less wise they were. He believed this because there were many things that these people did not know, yet thought they knew. He realized that he was wiser than they because he knew that he did not know them. His examinations caused many people to dislike him and be hostile towards him, because as he proved other people unwise, they thought that he was saying that he was wise. For this reason, he believes it is his divine duty to teach all who think that they are wise but are not, that they are not. Thus, he has ended up in poverty, being followed by people who want to learn; and now prosecuted.

As for the charge of not believing in gods, it does not make sense because it contradicts the charge of teaching of supernatural beings, of which he is accused. Thus, neither of these charges stands. However, it is the public's disfavor of him that he believes will bring about his downfall. Yet he is not scared of death, because he thinks that nobody knows enough about death to be scared of it, and that if it an endless peaceful sleep then it is restful, and if his soul lives on to meet everybody who is already dead, he will enjoy that. Therefore, either way he is not afraid, and thinks it is better to die an honorable death than to disobey God's orders and live.

However, when the verdict is guilty, he suggests a reward for himself as an alternative to death, as he thinks of himself as a hero. He then proposes a fine, which the jury refuses to grant to him.

More summaries and resources for teaching or studying The Apology.

The Apology from BookRags. (c)2022 BookRags, Inc. All rights reserved.