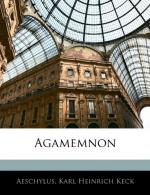 After King Agamemnon and Queen Clytaemnestra go inside of their royal palace in the city of Argos, the captured Trojan woman named Cassandra remains seated in the chariot, waiting to be led inside by Agamemnon's servants as he has ordered them to do. The Chorus of Elders, although happy that the Trojan War has ended, says that it is afraid about something. These wise old men are not sure what exactly is afflicting them, only that "Hope is gone utterly,/the sweet strength is far away./Surely this is not fantasy./Surely it is real, this whirl of drifts/that spin the stricken heart. Still I pray; may all this/expectation fade as vanity/into unfulfillment, and not be" Lines 992-1000. The Chorus is certain that something terrible is going to happen very soon, they pray to the gods for comfort and ask for the disaster that approaches them to be avoided. There are no exact details given, however, about what exactly is bothering them.

The Chorus mutters about fate and how men are so incomparable to the gods, for humans are at the very mercy of the gods. They speak, "But when the black and mortal blood of man/has fallen to the ground before his feet, who then/can sing spells to call it back again?/Did Zeus not warn us once/when he struck to impotence/that one who could in truth charm back the dead men?/Had the gods not so ordained/that fate should stand against fate/to check any man's excess" Lines 1019-1027. The Chorus of Elders mentions a man who tried to bring people back from the dead and who was punished for his pride, just like any man who questions the god's power. This is the same reference that Agamemnon himself had made when his wife begged him to walk on a red carpet so that people could bow down and honor him. He feared that this act might offend the gods, yet his wife insisted and he agreed to obey her wishes. Perhaps the Chorus is suggesting that Agamemnon will be punished by fate for his own excesses after walking on the red carpet, for this was his fear. These men continue to worry and lament as Clytaemnestra reappears from inside of her palace.

The Queen of Argos ignores the Chorus altogether and addresses Cassandra, who is still sitting alone in the chariot. She urges the Trojan slave to come inside of the palace, since Zeus decided that she would be controlled by her captors. Inside of her palace, they are waiting to pour an offering at the altar of the gods until this girl can join them. Cassandra does not reply, however, and the Chorus wonders if the Trojan is even able to understand what she is saying, since she is from a foreign land after all. Clytaemnestra calls her a "barbarian," and impatiently urges her again to come inside, "I have no leisure to stand outside the house and waste/time on this woman. At the central altarstone/the flocks are standing, ready for sacrifice/we make to this glad day we never hoped to see./You: if you are obeying my commands at all, be quick./But if in ignorance you fail to comprehend,/speak not, but make with your barbarian hand some sign" Lines 1055-1061. The Queen is very anxious for Cassandra to go inside of the house, but there is no response from the girl at all. In some ways, Clyatemnestra acts like a man by saying she isn't going to waste her time on "this woman." One would think that Clytaemnestra would have more compassion for the girl, yet instead she treats her with the same disrespect that the Chorus and Agamemnon showed to her. Disgusted at having no response from Cassandra, Clytaemnestra storms back into her house.

However, Cassandra then steps out of the chariot, lamenting aloud to Apollo. Stunned that she has now decided to speak, the Chorus reprimands her that Apollo cannot do anything to help her. She continues to cry, "Apollo!" in vain, while the Chorus points out that she is a prophetess with the ability to see into the future. The old men wonder if she can see her own death as it will occur. Cassandra cries out maniacally that God hates Agamemnon because of his father Atreus, recalling that Atreus once cooked his brother Thyestes' children and fed them to him. The Chorus declares that it does not like prophets, nor does it want to know the future. Ignoring these words, she speaks ambiguously about a "stroke of atrocity she plans within the house." Confused, the men do not know what she is talking about, even as she continues to talk about a husband being bathed "bright with water" while nearby there is a murderous woman who is going to deliver a "monstrous death" to her husband. The Chorus of Elders, realizing that she is talking about Clytaemnestra murdering Agamemnon, becomes very afraid. Now there is no hope, there is no comfort, as they scream "Ruin is near, and swift."

The Trojan prophetess finally speaks more exactly, "Keep from his mate the bull./Caught in the folded web's/entanglement she pinions him and with the black horn/strikes. And he crumples in the watered bath./Guile, I tell you, and death there in the cauldron wrought" Lines 1125-1129. Cassandra explains how Clytaemnestra shall murder her husband, who is the 'bull," for she will bind his arms in some sort of a net, stabbing him to death, until he shall collapse into the bathtub. She warns against Clytaemnestra's "guile" or cleverness, for it has thus far deceived them all. The Chorus does not want to believe this news, saying that prophesies serve no good use. Yet Cassandra is in her own little world, asking Apollo why he has chosen to have her die there with Agamemnon, comparing herself to a nightingale which lives such a peaceful life. She wonders why must her life be filled with death and violence. First, she saw her home, Troy, burned to the ground, its people slain and its treasures stolen. Now she, too, will die at the hands of Clytaemnestra. Cassandra laments for the sheep slaughtered at Troy, while the Chorus begins to wonder if she will ever stop complaining about all of the misfortunes that have befallen her, saying "I can not see the end."

Yet Cassandra continues with her lamenting, recalling that in the past there was a terrible sin that occurred in that house of Atreus. This girl had never been to Argos before and knew nothing about what Atreus did to Thyestes' children, and she states that there are "vengeful spirits" in that house because of the injustice that was done to Thyestes. She then asks the Chorus somewhat sarcastically what their reaction to those words are, "Did I go wide, or hit, like a real archer? Am I/some swindling seer who hawks his lies from door to door?/Upon your oath, bear witness that I know by heart/the legend of ancient wickedness within this house" Lines 1194-1197. The Chorus of Elders is stunned that she can know about this. She replies that Apollo himself revealed these events to her. The Chorus is now very interested to hear about this girl, asking if Apollo fathered any children by her. Cassandra says that he wanted to be her lover, and in return he would give the gift of prophesy, but after she received her prophetic gifts she rejected Apollo's love. Her punishment as a result is that, although she can keep her gift of prophesy, no one believes what she tells them. Contrary to this statement, the Chorus of Elders says that it does believe that Agamemnon's life is in danger.

Cassandra continues to lament that she can see Thyestes' children fluttering above the house, eating their own flesh; she is haunted by this horrible vision. Smarvels that a woman would dare to kill her own husband, mentioning the names of some other women in history who have committed violent acts. She compares Clytaemnestra to Scylla, a woman who was turned into a snake monster, forever bound to a coastal rock cave from which she devours passing sailors as their ships travel nearby. In essence, the Queen of Argos is herself a monster inside. Cassandra says that there is no point in complaining any more or in trying to warn anyone about what is going to happen, because nobody will listen to her prophesies anyway. She insists that she and Agamemnon are fated to die. She ends by saying that soon, the Chorus will be standing over her dead body, thinking about how right she had been in predicting what was going to happen. Although everything has been obviously explained, the Chorus acts a bit confused now, saying that it has heard everything but does not understand exactly what she means. The Chorus wonders what man shall kill Agamemnon, but Cassandra reminds them that it is a woman, Clytaemnestra, who shall commit this act of murder.

Cassandra again cries out to Apollo, saddened that he is so cruel to her that the Chorus cannot even save her or avoid her own death, for they too now have misunderstood her prophesy so completely. She points out how she has survived the destruction of Troy and the deaths of so many friends, and she has survived all of that ruin only to die after arriving in Argos. She makes another prophesy that shall follow her death and that of Agamemnon, "For there/shall come one to avenge us also, born to slay/his mother, and to wreak death for his father's blood./Outlaw and murderer, driven far from his own land,/he will come back to cope these stones of inward hate./For this is a strong oath and sworn by the high gods, that he shall cast men headlong for his father felled./Why am I then so pitiful? Why must I weep?" Lines 1279-1286. Finally, the Trojan prophetess realizes that she has been complaining a lot, and she suddenly decides that it won't change anything at all. Anyway, her death will be avenged by a son of Clytaemnestra, who shall one day avenge his dead father. Cassandra accepts that she will die. The Chorus of Elders implores her for how she can be so peaceful, knowing that she will be murdered and compares her to a sacrificial cow that will be slain at the altar of God.

Cassandra replies that she can't change what is already predestined to happen, stepping towards the entrance to the palace. Before entering, she points out that the palace smells like a "slaughterhouse" inside, as if blood has been spilled everywhere, adding that it feels like an "open grave." With these words, the Trojan prophetess begins to walk into the palace, bidding farewell to the members of the Chorus, adding that after she falls at the hand of another woman, Clytaemnestra, her murderess also shall feel revenge one day. The Chorus watches dumbly as Cassandra walks off to her death, without doing anything to keep her safe. They stand in a state of inaction, calling her a "poor wretch." She speaks one final time before going to die at long last, praying to Apollo, the god of light, "against that ultimate shining when the avengers strike/these monsters down in blood, that they avenge as well/one simple slave who died, a small thing, lightly killed" Lines 1324-1326. Cassandra asks Apollo to remind the person who will one day murder Clytaemnestra that he is also avenging the her death . With these last words, she enters the royal palace of Argos and is not heard from again. The Chorus of Elders does not enter the house, but instead remains outside, waiting and listening.