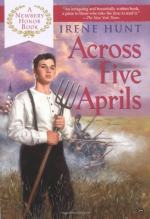 Irene Hunt was born to Franklin P. and Sarah Land Hunt on May 18, 1907 in Pontiac, Illinois. The family soon moved to Newton, Illinois, but Franklin died when Hunt was only seven, and the family moved again to be close to Hunt's grandparents. Hunt's childhood was lonely, but she shared a special relationship with her grandfather who told her stories about his childhood during the Civil War. The stories she heard from her grandfather became the basis of the story of Jethro in Across Five Aprils.

Hunt graduated from the University of Illinois in Urbana to go onto University of Minnesota, Minneapolis where she earned her M.A. In Illinois public schools, she was a teacher of English and French. Later, she taught psychology at the University of South Dakota, Vermillion, but eventually came back to elementary and junior high school to become a director of language arts in Illinois. After she retired in 1969, Hunt devoted her time to writing. It was at age fifty-seven that she published her first novel.

Hunt once said: "Words have always held a fascination for me, causing me to be teased often as a child when I used them lavishly without having the slightest idea of their meaning. The wish to write pages full of words, to make them tell the stories that I dreamed about, haunted me from childhood on." Hunt also said that during her years as teacher, she found that it was better to teach history through literature. Thus, she wrote books that would help her students better understand history. But her books do not have a specifically intended audience as Hunt once maintained that she writes when she has something to say.

When Across Five Aprils was published in 1965, it received much acclaim. Awarded the Newbery Honor Book, the novel was also Hunt's personal favorite among the ones she wrote. A critic maintains: "Brilliant characterization, a telling sense of story, an uncanny ability to balance fact and fiction, and compassionate, graceful writing mark Hunt's small but distinguished body of work." With Across Five Aprils, Hunt established herself as one of the greatest historical novelists, proving that she can write for both adult and children audiences. With her faith in "courage, love, and mercy," Hunt wrote her books to emphasize this faith.

More summaries and resources for teaching or studying Across Five Aprils.