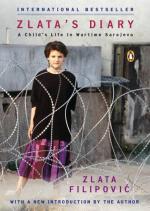 Modeling a news reporter, create a podcast as if you were reporting from a war zone. Create a script to help the newscast flow better.

Find a video or audio clip on the internet discussing an event similar to what Filipovic encountered in Sarajevo. Be prepared to present your video and reasoning for choosing it in front of the class.

Write a poem based on your feelings as you read entries from "Zlata's Diary: A Child's Life in Wartime Sarajevo."

Select another person in the story and write a diary entry of an event discussed by Filipovic from their view point.

Create a poster poster protesting the war in Bosnia. Take the stance of a common citizen in Sarajevo.

Create a new cover for "Zlata's Diary: A Child's Life in Wartime Sarajevo." Be...