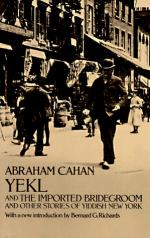 Abraham Cahan
This set of Lesson Plans consists of approximately 116 pages of tests, essay questions, lessons, and other teaching materials.

2. What does Jake do when he realizes he can't remember his prayers?
(a) He goes to a religious service.
(b) He makes up his own prayers.
(c) He skips praying.
(d) He borrows a prayer book.

6. What does Flora's father hope her future husband will do for a living?
(a) A builder.
(b) A preacher.
(c) A businessman.
(d) A writer.

7. Why does Yossele kick Jake after arriving in the United States?
(a) For not bringing him over sooner.
(b) For not sending him money.
(c) For not hugging his mom.
(d) For leaving in the first place.

9. What upsets Rouvke most about learning English?
(a) Trying to remember the vowel sounds.
(b) Having to read in English.
(c) Other people teasing him.
(d) Forgetting his own language.

10. What frightens Gitl about Mamie?
(a) She can't understand her.
(b) She goes to college.
(c) She is beautiful.
(d) She threatens Gitl.

11. Why do Shaya's collection of Hebrew books make Flora cry?
(a) They are dusty and old.
(b) She doesn't understand them.
(c) The collection is too small.
(d) They take the place of her books on the shelf.

12. Why does Flora have Tamara send food to Shaya?
(a) Because she is similar to him.
(b) Because Tamara was in Flora's way.
(c) Because she wanted to run away.
(d) Because he is hungry.

13. Why does Flora's father tell Tamara he won't take Flora with him on his trip after Passover?
(a) Because it's his private trip.
(b) Because she won't fit in.
(c) Because he doesn't have enough money.
(d) Because she refuses to go.

1. What upsets Flora's father about Pravly?

2. Where does Gospodin say he met Hanele?

3. How does Jake explain Mamie's visit in "A Paterfamilias"?

4. How does Flora feel about Shaya's love of American books?

5. What does Rouvke change his name to in America?

More summaries and resources for teaching or studying Yekl and the Imported Bridegroom and Other Stories of the New York Ghetto.

Yekl and the Imported Bridegroom and Other Stories of the New York Ghetto from BookRags. (c)2021 BookRags, Inc. All rights reserved.