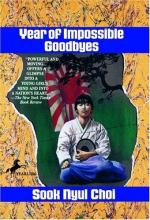 2. If caught trying to flee to the South, what are the children to say they are doing?
(a) Going to see their dying grandmother.
(b) Nothing.
(c) Fleeing to the South.
(d) They are lost.

3. Where do Sookan and Inchun bravely go to look for their mother?
(a) Russia.
(b) The guardhouse.
(c) A brothel.
(d) Pyongyang.

5. While searching for their mother, why do Inchun and Sookan look diseased?
(a) They have swollen eyes and cough a lot.
(b) They are wearing hospital gowns.
(c) They are skinny and smell bad.
(d) They are covered with mosquito bites.

1. Who do the Koreans hope will rescue them from foreign invaders?

2. What do Sookan and Inchun do after they have crossed the barbed wire fence into the South?

3. What animals do Sookan and Inchun see at the guardhouse while searching for Mother?

4. How does Mother finally reach the South?

5. Using his job as a cover, what does Sookan's father do?

1. What does the family do when they find out that the war is over?

2. Describe the uniform of the proletariat.

3. What does Aunt Tiger do to ease suspicions about the family's true opinion about Communism? How well does it work out?

4. After the Russians invade northern Korea, where is father and what is he doing?

6. What do you think is the real reason the guide wanted Mother to separate from Sookan and Inchun?

7. After the Japanese evacuate, what happens to Unhi's brothers?

8. Do you think that Korea is better off with the Russians than the Japanese?

9. When the family prepares to escape to the South, who stays behind and why?

10. How are Inchun and Sookan interrogated by the Russians?