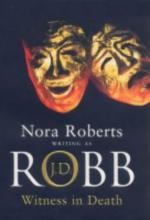 Nora Roberts
This set of Lesson Plans consists of approximately 96 pages of tests, essay questions, lessons, and other teaching materials.

1. What is the surname of the first person to be questioned in the murder?

2. Eve worries about the relationship between the man and which other character?

3. At what television station does the reporter work?

4. Who assaults Eve while trying to flee?

5. What is Peabody's first name?

1. Who is Draco's understudy for the play? How does he feel about Draco?

2. Who greets Eve when she arrives home? What is the relationship between this person and Eve?

3. What does Eve do when she arrives at work in the morning? What does she find in her office?

4. Who calls Eve at Central asking for a meeting? What is the person's connection to the cop?

5. What about the play is shocking to Dallas?

6. Who does Dallas meet with in the beginning of Chapter 5? What information has been passed on without Eve's knowledge?

7. Who is the first person to be interviewed by Dallas? What part does the actress have in the play?

8. Was Quim involved in the murder of Richard Draco? Does he have any inside information? Explain.

9. What else is discussed on a more personal level?

10. What is Eve's advice to Nadine? Will Nadine comply?

Dallas had frequent and violent nightmares about her father, being abused, and the hotel room in Dallas. Write an essay explaining Dallas' violent and traumatic childhood. What happened to Dallas' parents? Why was she so badly abused? Who ended up raising Dallas? What is the girl's real name? How did the experience change Eve? How did the circumstances affect her in the Draco-Quim case? Do you think Dallas was able to overcome her childhood traumas? Explain. How could she stop the nightmares?

Analyze the relationship between Nadine and Dallas. What is the common ground for friendship? How do their professional lives often interfere with their personal relationship? How does one know when a boundary has been crossed? Do the women respect each other? How has their relationship evolved? Where might it go from here? Do you think the relationship will ever change drastically? Did Nadine's relationship with Draco help or hinder Eve's opinion? How did it affect the case?

Areena Mansfield/Anja Carvell is the birth mother of Carly Landsdowne as well as Michael Proctor. While Carly was given up for adoption, Michael was not. What was the difference in the scenarios? What made Areena give up Carly but keep Michael? Compare and contrast the scenarios as well as the resulting parent/child relationships. How did the decisions ultimately affect each person? Could the relationships ever be repaired? Does anyone want to try to repair the relationships? Explain.