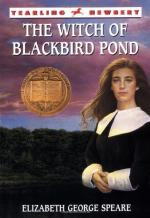 The Witch of Blackbird Pond Quiz | Two Week Quiz A

1. In Chapter 7, what do Mercy and Judith tell Kit when the guests are gone?
(a) That they do not want her to marry William.
(b) That they think William does not really like her anymore.
(c) That William is preparing for marriage.
(d) That they like John more than William.

4. How is Kit received when her aunt learns that she has come to live with them?
(a) Kit is told to leave immediately.
(b) Her aunt is very excited.
(c) Kit is not well-received.
(d) Her aunt knew she was coming.

5. What does Hannah do to raise some money to pay for taxes and fines?
(a) She knits socks and blankets.
(b) She spins flax for some of the townspeople.
(c) She sells bread.
(d) She sells vegetables.

1. Who arrives while Kit is visiting Hannah in Chapter 10?

2. How does Kit describe her Aunt's home?

3. Which members of the Wethersfield community are expected to go to the meeting?

4. How does Rachel respond when she hears about Kit spending time with Hannah?

5. After Kit's grandfather dies, what happens to the plantation and Kit's wealth?

The Witch of Blackbird Pond from BookRags. (c)2020 BookRags, Inc. All rights reserved.