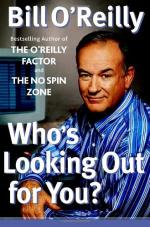 Who's Looking Out For You? Essay Topics & Writing Assignments

Bill O'Reilly makes it clear that he is not associated with any political party and his job as an analyst requires him to bring a certain amount of skepticism to all political situations and events.

- Describe the different political opinions that Bill has in defining himself as an Independent.

- Explain why his independent mindset gives him an advantage over other analysts in covering world events.

According to Bill, the basic cause of many problems in the country is a bad family life.

- Provide at least three examples of the division between legality and irresponsibility in parenting.

- Analyze the negative effects of children born out of wedlock using the statistics and information provided in the book.

- Describe the cycle of abuse that Bill refers to in parenting, why it is so difficult to deal with, and the ways it is...

Who's Looking Out For You? from BookRags. (c)2022 BookRags, Inc. All rights reserved.