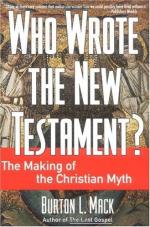 Who Wrote the New Testament?: The Making of the Christian Myth Test | Final Test - Easy

4. What is different about Peter in comparison to Jude?
(a) It clarifies the opponents more clearly.
(b) It is completely different in content.
(c) It is more violent.
(d) It is more socially demoralizing.

6. What is the term for "a small group of writings believes to have been written by bishops and others" who knew the apostles?
(a) Martyrdoms.
(b) Apostolic Fathers.
(c) Revelations.
(d) Successions.

8. What did Justin argue to the Romans about Christianity?
(a) That it actually helped them.
(b) That it hurt their government.
(c) That all Christians should be exiled.
(d) That it was better than Judaism.

11. Where did Justin claim the Greek philosophers received their wisdom?
(a) From Moses.
(b) From the people.
(c) From Abraham.
(d) From the Greek gods.

15. What word is used to imply the significance of the miracle stories in the Gospel of John?
(a) Signs.
(b) Revelations.
(c) Gifts.
(d) Logos.

1. How does John portray Jesus, according to Mack?

2. Why did the book of Hebrews not succeed?

3. What did Justin say about the treatment of the Jews by God, in terms of the fall of the temple and the diaspora?

4. What is Ignatius' second appeal in his letters to the churches?