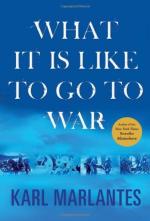 1. How many years after the therapy-group experience, did Marlantes have dinner with Joseph Campbell?
(a) 2 years.
(b) About 8 years.
(c) About 5 years.
(d) 7 years.

4. What was Marlantes religious affiliation growing up?
(a) Presbyterian.
(b) Lutheran.
(c) Methodist.
(d) Baptist.

5. Where did Marlantes go when he first felt emotion about the killing he had done during the war?
(a) A meadow.
(b) His room.
(c) The woods.
(d) Church.

6. When Marlantes was with his company in the high mountains that formed the Vietnamese border with Laos, what did he target for an air strike?
(a) A village.
(b) An underground base.
(c) Elephants.
(d) A hospital.

11. What creature did Marlantes have to kill after dogs had harried it?
(a) Hamster.
(b) Kitten.
(c) Seagull.
(d) Rabbit.

13. When things were going wrong, in what language would Marlantes' grandfather cuss?
(a) Italian.
(b) German.
(c) Swedish.
(d) French.

1. In 1968 when Marlantes lead an undermanned platoon, what was the height of the cliff on the north side of their area?

2. When did Marlantes first write a recurring nightmare in his journal?

3. What rank did Marlantes hold after Vietnam?

5. What were Marlantes and his grandfather afraid had slammed into their net in 1959?

What It Is Like to Go to War from BookRags. (c)2022 BookRags, Inc. All rights reserved.