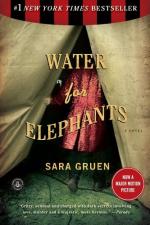 Sara Gruen
This set of Lesson Plans consists of approximately 135 pages of tests, essay questions, lessons, and other teaching materials.

7. Where is Jacob at the beginning of his circus memories?
(a) In the train belonging to a circus.
(b) In the big top watching a circus.
(c) In the cookhouse of a circus.
(d) In the menagerie tent of a circus.

9. Why does August become annoyed with Marlena over lunch in Chapter 9?
(a) Marlena flirts openly with Jacob.
(b) Marlena feeds one of the displaced workers.
(c) Marlena refuses to make changes to her performances that August has recommended.
(d) Marlena ignores August's attempts at reconciliation.

11. What does Jacob see outside the window?
(a) An advertisment for a new senility drug.
(b) A moving van at the house next door.
(c) A circus setting up a block or two away.
(d) A new resident arriving.

1. Who is Marlena, the woman Jacob is looking for in the prologue?

2. Who does Camel attempt to speak to on Jacob's behalf?

3. Why is class interrupted?

4. Who owns the sick horse Jacob is to examine in Chapter 6?

5. Why is Jacob happy that he can remember the nurse's name is Rosemary?