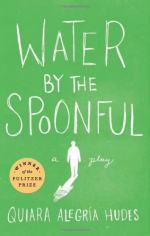 3. What two artists are on the cassette tapes ChutesAndLadders offers for free to whomever buys his car?
(a) Lionel Richie and Tina Turner.
(b) James Brown and John Coltrane.
(c) Billy Ocean and Dionne Warwick.
(d) Billy Idol and Duran Duran.

4. When Orangutan is at the Sapporo train station and is chatting online with ChutesAndLadders, what objects in America does she liken to internet cafes in Japan in terms of how ubiquitous they are?
(a) Public restrooms.
(b) Parking meters.
(c) Charging station.
(d) Payphones.

5. Who shines a flashlight onto Orangutan and offers her his assistance?
(a) A train conductor.
(b) A policeman.
(c) A passing businessman.
(d) Chutes and Ladders.

6. What literary device does Elliot declare to be present in Haikumom's choice of computer password once he figures it out?
(a) Hyperbole.
(b) Personification.
(c) Understatement.
(d) Irony.

8. When Elliot is too emotionally overcome to continue speaking, who delivers the rest of his line for him at the end of the scene at Ginny's funeral?
(a) Fountainhead.
(b) John.
(c) Odessa.
(d) Yazmin.

10. When Orangutan reports her research findings to ChutesAndLadders while she waits at the Sapporo train station, what government goal does she give for the project's implementation?
(a) To create jobs.
(b) To improve citizens' views.
(c) To improve urban aesthetics.
(d) To please the emperor.

13. When Orangutan reveals online that Elliot has struggled with pain medication addiction in the past, how many times does she say he had been hospitalized due to drug overdoses?
(a) 1.
(b) 4.
(c) 3.
(d) 2.

14. What event does ChutesAndLadders name as the event that once ended a 5-year stretch of sobriety in his life?
(a) Going to see his daughter.
(b) Burying his wife.
(c) Going to see his son.
(d) Losing his job.

15. What travel-related location does Odessa's unconscious mind think she finds herself during her drug overdose?
(a) A train station.
(b) An airline terminal.
(c) A bus terminal.
(d) A cruise ship boarding plank.

1. What word does Orangutan use to describe ChutesAndLadders when he finally calls his son?

2. What metaphor does ChutesAndLadders use to describe what may happen to Orangutan's heart if she does meet her birth parents?

3. Though Fountainhead had said in his first post on the Addiction Support forum that he only smokes crack cocaine once per week, what is the truth he reveals to Haikumom when they meet in person?

4. In what city was Orangutan born?

5. How many arrests for civil disobedience did Ginny have on her record during her lifetime?