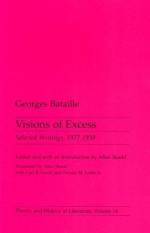 Georges Bataille
This set of Lesson Plans consists of approximately 116 pages of tests, essay questions, lessons, and other teaching materials.

1. What does Bataille describe as the only truly liberating act?
(a) Lovemaking.
(b) Art.
(c) Revolutionary destruction.
(d) Suicide.

3. What did Hegel claim about nature?
(a) That it was motivated by the Oversoul.
(b) That it was the human soul externalized.
(c) That it contained the world-spirit.
(d) That it was unreasonable.

6. What feeling does Bataille say grows in response to revolutionaries?
(a) Faith.
(b) Disillusionment.
(c) Distrust.
(d) Messianism.

7. What approaches to Hegel's philosophy did Nicolai Hartmann compare?
(a) Verbal and reality-based.
(b) Feminist and modernist.
(c) Practical and theoretical.
(d) Historical and philosophical.

8. What was the purpose of the Popular Front, in Bataille's account?
(a) To oppose Hitler.
(b) To oppose immigrants in France.
(c) To overthrow the Vichy government.
(d) To oppose fascism in France.

9. What does Bataille say would result from a difference of events in his experience?
(a) He would be at war with himself.
(b) He would be an other.
(c) He would have to confront his true self.
(d) He would reveal his alter-ego.

10. What does Bataille's 'me in the void' realize in "Sacrifices"?
(a) That he doesn't exist.
(b) That he might cease to exist.
(c) That he has dominion over everything.
(d) That he might have to create himself.

12. What does Bataille say democracy is based on?
(a) Free elections.
(b) A weak opposition.
(c) Free speech.
(d) Open debate.

13. What does Bataille say scientists said about the dialectic?
(a) It was incompatible with science.
(b) It was the one true science.
(c) It was a matter of faith.
(d) It was demonstrated in evolution.

15. What does Bataille say man demanded of the earth?
(a) Answers.
(b) Productivity on the earth.
(c) Necessity above the universe.
(d) Consolation below the earth.

1. Whom does Bataille say can never touch the reality of earth?

2. Who developed the theory of conspicuous consumption?

3. What does Bataille describe as the result of individuals asking critical questions, in "Nietzschean Chronicle"?

4. What does Bataille say the theory of conspicuous consumption is used for?

5. What does Bataille use as evidence of his position on dialectics?