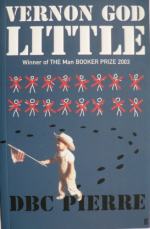 D.B.C. Pierre
This set of Lesson Plans consists of approximately 104 pages of tests, essay questions, lessons, and other teaching materials.

• Vernon Little sits in the Sheriff's office in his underwear. Deputy Vaine Gurie returns with his clothes and leads him to the interrogation room.

• Vaine informs Vernon he is an accessory to murder.
• As Vaine is asking Vernon where he was on Tuesday morning, Vernon's mother phones. She tells him her friend has to pick him up because she is busy baking cakes.

• Vernon claims he was running an errand for his teacher, Mr. Nuckles, at the time of the murders. He denies being on drugs and possessing a firearm.

• Pam arrives to pick Vernon up from the police station and drives him to the Bar-B-Chew Barn.

• Vernon thinks about his friend, Jesus, the boy responsible for the murders. His says though his friend had always been clumsy, lately he had been acting plain weird.
• The morning of the murders Vernon rode to school...