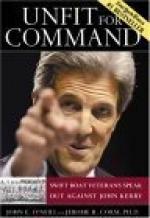 This quiz consists of 5 multiple choice and 5 short answer questions through Introduction.

3. Which one of the following does Hoffman feel is doubtful in Kerry?
(a) His citizenship.
(b) His political ambitions.
(c) His ethics.
(d) His loyalty.

4. How do the authors introduce their argument?
(a) With an advertisement.
(b) With a letter.
(c) With a quote.
(d) With a poem.

5. What does the open letter from the Swiftees label Kerry?
(a) Pathetic.
(b) A fraud.
(c) A great exaggerator.
(d) Greedy.

1. What were the people included in the "War Heroes" exhibit recognized for?

2. What is the intent of Unfit for Command, as clearly stated by the authors in the introduction?

3. What causes Hoffman to be concerned about Kerry with regards to his political goals?

5. When did the Swift Boat Veterans Reunion take place?