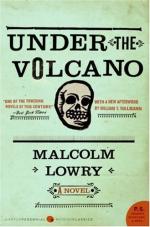 1. Why does Yvonne end up not buying the animal she wants at the brewery?
(a) Because the consul has taken all of her money.
(b) Because the animal bites her.
(c) Because the price is too high.
(d) Because another patron outbids her during the auction.

2. What does the consul remember after he leaves Quincey's house?
(a) That he had planned to go out of town.
(b) That he was supposed to get flowers for Yvonne.
(c) That he hurt his ankle pretty badly the night before.
(d) That he meant to give Quincey some money.

3. What event is supposed to happen the first night Yvonne returns to Quauhnahuac?
(a) A lunar eclipse.
(b) A sacrifice.
(c) A midnight church service.
(d) A festival.

5. What does Yvonne do once she arrives back at the consul's house?
(a) Takes a bath.
(b) Throws herself off the balcony.
(c) Starts breaking dishes.
(d) Leaves immediately.

1. Who shaves the consul while Hugh is over?

2. How does Yvonne feel about the item that the mailman brings to Laruelle's house while she is over?

3. What animal do Hugh and Yvonne keep passing during their excursion together?

4. What is the subject of the book that the bartender returns to Laruelle in Chapter 1?

5. Where has Hugh been living while on assignment?

1. What does the consul think and say about Yvonne's looks to her?

2. What can the consul not forget during the town's festival?

3. What plans does Hugh confess to Yvonne during their walk?

4. What does Laruelle observe about the consul's adoptive family?

5. How does Yvonne react to seeing the consul when she returns to Quauhnahuac?

6. Why does Hugh not know about the state of the consul's and Yvonne's marriage?

7. What does the consul think is the source of his visions and hallucinations?

8. How does the consul react to Yvonne's arrival?

9. In Chapter 1, why does a crowd of people suddenly flood out of the theater?

10. What does Yvonne admit to Hugh about her plans for the consul?