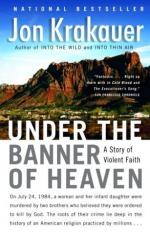 Under the Banner of Heaven: A Story of Violent Faith Test | Mid-Book Test - Hard

Jon Krakauer
This set of Lesson Plans consists of approximately 137 pages of tests, essay questions, lessons, and other teaching materials.

1. Why did Smith plead guilty to treason?

2. For the murders of Brenda and Erica Lafferty, what was Dan's sentence?

4. Debbie Palmer was her own step-grandmother because polygamist men have the right to marry their ______.

5. What did Emma threaten Smith with to get him to stop marrying more women?

1. How was it possible for Debbie Palmer to be her own step-grandmother?

2. What does Krakauer see as "strange" about the road to Smith's revelation?

3. Why was DeLoy no longer with the Mormon Church?

4. What is Krakauer's intention with "Under the Banner of Heaven"?

5. Does Krakauer believe taking funds from the government is hypocritical of fundamentalist Mormons? What is their justification?

6. Why was the LDS most appealing to Americans?

7. What caused Dan Lafferty's trouble with the law? Was this compensated for in any way through religion?

8. What caused the end of Smith and Law's friendship?

9. According to Lorna Craig, how was the response to Elizabeth Smart's disappearance different from Ruby Jessop's? Why does she believe there was a different response and effort?

10. Why was Joseph Smith charged with fraud? How did his treasure business compare with his religious revelation?

Krakauer gives Mormon women a strong voice in his book. Providing the reader with angles ranging from Flora Jessop, who fled her polygamist home, to Emmylou, who dreams of being a plural wife. Discuss the point of view of Mormon women offered in the book and what dimensions of the church and humanity they display.

Ron was once considered the most levelheaded of his brothers, but he soon became their worst influence. Yet, the adoration of his brothers endured. Discuss what made Ron take his dark turn and what his inspirations and motives were for his actions.

Under the Banner of Heaven: A Story of Violent Faith from BookRags. (c)2022 BookRags, Inc. All rights reserved.