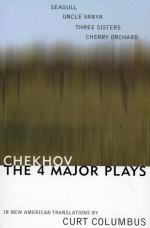 Anton Chekhov
This set of Lesson Plans consists of approximately 98 pages of tests, essay questions, lessons, and other teaching materials.

2. ___________ interrupts Astrov's speech by saying that he still uses wood in his outhouses and fireplaces.

3. Yelena says the reason she and Vanya are friends is because they are both very ________.

4. What does the Professor wonder aloud as he is waking up and talking to Yelena?

5. ________ could have proposed marriage to Yelena before she met her current husband, though he did not.

1. What happened when Astrov, in his memory, tried to operate on a patient who died on the table?

2. Why doesn't Astrov leave the scene when Vanya asks him to leave?

3. What does the Professor say about the medicine he wants Sonya to pass to him?

4. What does the Professor think is the reason for his sudden shortness of breath as he is asking for a book?

5. What does Vanya tell everyone to do when he finally reenters the scene with Astrov?

6. What is Marina doing as she is sitting at the start of the play in a country home in Russia?

7. What does Marina think about people who are living a hundred years in the future?

8. What does Astrov say when Sonya asks him when he might be back to the estate?

9. What are some of the things Sonya suggests Yelena do if she is really as bored as she seems?

10. What does Vanya go out to do in order to make Yelena feel better?

Astrov believes that places where trees have been well-tended are places where people are more artistic and wise.

Part 1: Why do you think Astrov speculates that well-tended areas of nature produce more artistic and wise people?

Part 2: Do you agree with the observation of Astrov? Why or why not?

Part 3: What do you think might also have an influence on people, making them more artistic and wise?

Yelena talks about how people destroy other people as well as destroying the forests around them.

Part 1: Why do you think Yelena is quick to point out how people destroy other people?

Part 2: Do you agree that people are quick to destroy each other? Why or why not?

Part 3: What are some reasons people might have for 'destroying' others in their lives?

The character of Vanya is one that seems to be looking for attention much of the time, always thinking that others aren't noticing him.

Part 1: Why do you think Vanya wants more attention in this play?

Part 2: Do you think Vanya deserves to have more attention than he is given within the play?

Part 3: How do you think the play might be different if Vanya was more confident in himself?