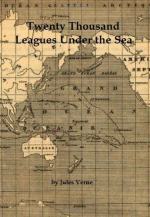 Objects & Places from Twenty Thousand Leagues Under the Sea

This highly technological submarine that is at least a hundred years ahead of its nineteenth century setting.

This frigate is commissioned to find the mysterious sea monster that is destroying ships at sea.

The Island of Crespo

An underwater island that Captain Nemo presents to Aronnax on their first undersea expedition.

An island where Le Perouse was lost.

The Island of Gilboa

A burial place under the sea.

A very large and fierce sea animal with tusks.

A secret passageway to the Mediterranean Sea, which is dangerous for the Nautilus to use.

This area is off the coast of Spain and the site of a very famous battle and shipwreck.

An undersea expedition through volcanic areas comes to the lost city now in ruins under the sea...