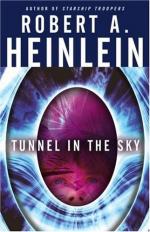 Robert A. Heinlein
This set of Lesson Plans consists of approximately 138 pages of tests, essay questions, lessons, and other teaching materials.

2. In Chapter 2, what sort of lamp does Mr. Walker light before dinner?
(a) Asian sconces.
(b) A Peace Lamp.
(c) A lunar reflector.
(d) A plutonium lantern.

4. After finishing school, Rod hopes to travel where?
(a) The Heavenly Mountains.
(b) The Australasian Republic.
(c) Luna.
(d) The Outlands.

5. Before Rod leaves for his exam, Helen reminds him that more people have died from what than from bleeding to death?
(a) Drowning.
(b) Old age.
(c) Disease.
(d) Worry.

1. What is unusual about Rod Walker's family home, as compared with newer homes in the area?

2. Who is the instructor for Rod's survival course?

3. What item does Deacon Matson assure Rod he can leave behind, because he will not need it for the final exam?

4. In Chapter 2, Rod's sister Helen has come home from where?

5. How does the air pressure of the Grand Canyon plateau compare with that of New Jersey?

1. Where does Rod decide to sleep during his first night on an unknown planet, and what unforeseen difficulty does he experience?

2. Why do Rod, Jack, and Jimmy decide to signal other students to join their group?

4. Which students does Rod consider taking as a partner for his final exam, and why does he ultimately reject each?

5. What career field does Rod wish to pursue?

6. What shocking secret does Jimmy reveal to Rod, regarding Jack?

7. What hunting technique do Rod and Jack develop together?

8. At the end of Chapter 7, who joins Rod, Jack, and Jimmy in their cave settlement?

9. Where has Rod's new partner, Jack, been sleeping?

10. Describe the invention of Dr. Jesse Evelyn Ramsbotham, as compared with the item he intended to invent.

More summaries and resources for teaching or studying Tunnel in the Sky.

Tunnel in the Sky from BookRags. (c)2022 BookRags, Inc. All rights reserved.