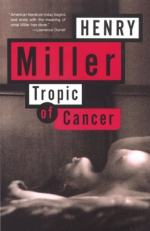 1. What is Henry's metaphor for his artistic suffering?
(a) Being enslaved
(b) Digging graves
(c) Walking on hot coals
(d) Lying down with lions

2. If Emerson is correct in saying that life consists of what a man thinks, what is Henry at this point?
(a) A wine bottle
(b) One long intestine
(c) A satyr
(d) No words on a blank page

3. What is the movie playing at the Cine Combat?
(a) Notorious
(b) The Jazz Singer
(c) Gone With the Wind
(d) Metropolis

4. What is Nanantatee's stated profession?
(a) A pearl merchant
(b) An art critic
(c) A Hindu mystic
(d) A newspaper publisher

7. What is Marlowe's usual trick to get out of paying a bar bill?
(a) He pretends he is going blind.
(b) He makes a quick trip to the toilet.
(c) He mumbles about leaving his wallet in other pants.
(d) He pretends he doesn't see the bill.

8. What does the American woman inquire about that astonishes Henry?
(a) The view
(b) The heating system
(c) The toilet
(d) The furniture

9. What does Serge offer Henry in exchange for his services?
(a) One meal a day and a place to sleep.
(b) Fifty francs a week.
(c) A private loft where he can write.
(d) Introductions to wealthy patrons.

10. What does the young Hindu do before leaving Paris?
(a) Visits a brothel again
(b) Gets the last of Henry's money
(c) Gets drunk
(d) Signs a book deal with a publisher

11. Who helps get Henry out of Nanantatee's apartment much of the time?
(a) A young Hindu lecturer from India
(b) Sylvester and Tania
(c) Germaine
(d) Kelpi

12. Sleeping on a mattress in the hall, what is Henry's troubled dream?
(a) The Mona Lisa scratching herself to get rid of bedbugs.
(b) Boris, Carl, and Tania laughing at him in the Louvre.
(c) The dancers and audience of Follies-Bergere all naked and scratching fleas.
(d) Germaine forcing him to marry her when she gets pregnant.

13. When Henry is writing about Claude, of whom is he really thinking?
(a) Mona
(b) Germaine
(c) Tania
(d) Fanny

15. In spite of Marlowe's assurances, what do Carl and Henry know he will not do?
(a) Recommend them for jobs
(b) Write them them every day
(c) Pay them when he returns
(d) Bring them souvenirs from America

2. How does Germaine look to Henry in the clear light of day?

3. What makes Henry feel ill when he opens the door of the commune?

4. What is the title that Henry wishes he had thought of?

5. In Henry's fantasy about Fanny, what is happening to her?