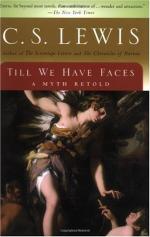 Till We Have Faces Test | Mid-Book Test - Easy

2. What prevents Orual from following Psyche up the Mountain?
(a) The King has locked her in the tower.
(b) She is too weak from her beatings to follow.
(c) She is too angry at Psyche to follow.
(d) The temple girls prevent her from going.

3. To what does the Fox attribute the fact that the dangers and plagues disappeared from Glome when Psyche was sacrificed?
(a) Chance
(b) Changing of the wind
(c) Ungit's satisfaction
(d) Divine nature's forgiveness

4. What name does Psyche call Orual that she learned from the Fox?
(a) Ungit
(b) Redival
(c) Maia
(d) Aphrodite

5. Why does Orual feel "as if a soft, cold hand had been laid" on her left side when the Fox calls Psyche "prettier than Aphrodite herself"?
(a) She believes Pysche is cursed.
(b) She believes it is a bad omen to say such things about a god.
(c) She believes the divine nature has no envy.
(d) She believes they will anger the King of the Mountain.

8. Orual describes Bardia's statement that "If a man was blind and she weren't the King's daughter, she'd make him a good wife," as. . .
(a) a challenge to her honor.
(b) the nearest thing to a love-speech ever made to her.
(c) the cruellest thing anyone had ever said about her.
(d) a proposal of marriage.

9. After the birth of his daughter, the King threatens to. . .
(a) stab the Priest with a dagger.
(b) kill his favorite servant.
(c) drag Orual by the hair.
(d) smash Ungit into powder.

13. Bardia offers to accompany Orual up the Mountain. Why?
(a) He wants to prevent her from burying Psyche.
(b) Orual has threatened to turn him over to the King if he does not.
(c) The King has asked Bardia to watch over Orual.
(d) He wants to assure her safety and help her in an honorable task.

1. What does the King do when Orual offers to sacrifice herself in place of Psyche?

2. Orual is comforted by the fire and food at her camp with Bardia. Why?

4. Orual feels an urgency to escape the Mountain. Why?

5. When Bardia suggests they sleep back to back to ward off the cold, Orual. . .

More summaries and resources for teaching or studying Till We Have Faces.

Till We Have Faces from BookRags. (c)2022 BookRags, Inc. All rights reserved.