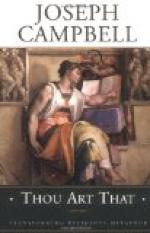 Thou Art That Character Descriptions

This person's personality was very much a part of the book, making him the most important figure as the author.

The person was a Jewish rabbi, who sought the leading wise man of his day, and went into the desert for 40 days of self-searching.

This person was a Greek philosopher whose view insisted on an utter distinction between God the Creator and his creation.

This person's mother was referred to as a virgin; he was born from her side.

This scientist defied the Roman Catholic Church to affirm that the earth is not the center of the universe, but that it is one of many planets circling the sun.

This medieval mystic claimed that the best God ever did for Man was to be man himself.

This person was the founder of psychoanalysis.