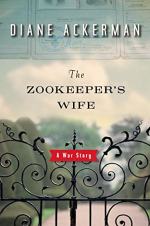 1. Why were Antonina’s parents killed when she was nine?

Antonina’s parents were killed during the Russian Revolution because they were members of the intelligentsia.

2. How does the author describe the sounds of the zoo in the morning before the war?

The author describes the sounds of the zoo like they are a symphony with the animals playing the melodies and instruments.

3. What special ability did Antonina have that Jan described as “metaphysical waves”?

Antonina had a special ability to calm animals. Jan believed she was very sensitive to the animals and could understand them better than most people.

4. What was special about the baby elephant Tuzinka?

Tuzinka was special because she was one of only 12 elephants born in captivity at the time.

5. How did Antonina describe her friend Magdalena?