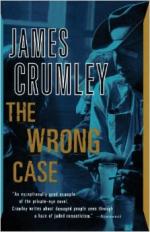 1. What is Milo's profession and why is his business struggling?

Milo's profession and business are discussed at the very beginning of the novel. Milo works as a private detective in the city of Meriwhether. Milo works for clients who want him to catch cheating spouses. However, Milo's business is struggling because the state's divorce laws have changed and his case load has dropped significantly.

2. Describe Helen and why she goes to see Milo in Chapter 1.

Helen is introduced in "Chapter 1" when she visits Milo's office. Helen is described as a beautiful woman who appears both fragile and vulnerable. She is also an English Literature professor. Helen seeks Milo's help in order to find her brother who has gone missing.

3. Who is Raymond and where are his last known whereabouts?

Raymond is introduced in "Chapter 1" when Helen seeks Milo's help. Raymond is Helen's sister and is now considered to be missing because she hasn't heard from Raymond in three weeks. Raymond lives in Meriwhether while working on a degree in Western studies. His last known whereabouts are known to be at the Grand Northern Hotel before it burned down.