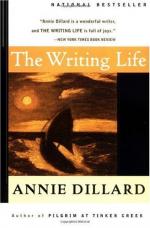 Annie Dillard
This set of Lesson Plans consists of approximately 133 pages of tests, essay questions, lessons, and other teaching materials.

1. What did Dillard find herself doing in the rare book room nearly every day for about two weeks?
(a) Writing notes to a chess player.
(b) Spying on the head librarian.
(c) Looking for rare books on chess.
(d) Playing chess with an unknown opponent.

2. How did Washington writer, Charlie Butts, write fiction in order to gain momentum?
(a) He repeatedly left the house and wrote quickly upon return.
(b) He left every last written page in the middle of a sentence.
(c) He wrote while running mindless errands.
(d) He did not rise from his chair until writing 10 pages.

3. As explained by Dillard in Chapter 1, what must be done to a piece of writing after the first draft is finished?
(a) Delete just a few sentences.
(b) You must strike it with a hammer.
(c) It must be mercilessly edited.
(d) Nothing; it is done.

4. Which book does Dillard say she discovered that she touched every night in the darkened library to find her room?
(a) World's End.
(b) It's the End of the World.
(c) The World I Live In.
(d) The World Without Us.

5. Who does Dillard say that she believes to be one of the most prolific writers who has ever lived?
(a) Thomas Mann.
(b) William Shakespeare.
(c) Edgar Allen Poe.
(d) James Patterson.

6. In an analogy about a photographer, why did the photographer say he brought the same rejected photograph for judgment every year?
(a) "...I only used that camera this one time."
(b) "...I just know it is my best shot."
(c) "...I had to climb a mountain to get it."
(d) "...I never throw anything away."

7. What does Dillard say that the printed word cannot compete with?
(a) The movies.
(b) Travel.
(c) People.
(d) Music.

10. Which author would walk through the hills for seven or eight hours on end without a hint of fatigue?
(a) Nietzsche.
(b) Dante.
(c) Stevens.
(d) Emerson.

11. What did Dillard do one night in the rare book room of the Virginia library?
(a) Moved a white chess piece.
(b) Left the lights on all night.
(c) Moved a black chess piece.
(d) Knocked over a chess board.

15. What animal, according to Dillard, is an analogy for characters in a writer's book "taking over"?
(a) A shark.
(b) The lion.
(c) The caterpillar.
(d) The sea star.

1. Who did Dillard see standing at the chess table in the Roanoke library one night?

2. Which religious sect did Dillard read about in the Virginia library?

3. What does Dillard's "line of words" do with random pictures in the writer's mind?

4. Who once said, "Which is the work in which he hasn't surrendered, under dire difficulty, the best thing he meant to have kept"?

5. What ended the chess game for Dillard in Chapter 2?

More summaries and resources for teaching or studying The Writing Life.