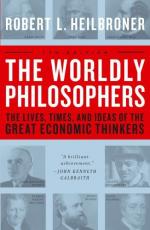 Robert Heilbroner
This set of Lesson Plans consists of approximately 113 pages of tests, essay questions, lessons, and other teaching materials.

5. Francis Ysidro Edgeworth was a graduate of what university?
(a) Oxford.
(b) Yale.
(c) Harvard.
(d) The School of Economic Thought.

7. What did President Hoover think would be banished from the nation in the late 1920's?
(a) Poverty.
(b) Prosperity.
(c) Investments.
(d) Discrimination.

8. Veblen was considered by the academic world to be what?
(a) A nonconformist.
(b) A flake.
(c) An economist.
(d) A satirist.

10. What book did Schumpeter write while working for an Egyptian princess?
(a) Progress and Poverty.
(b) Principles of Economics.
(c) Tract on Monetary Reform.
(d) The Theory of Economic Development.

12. Keynes felt the business cycles had to be countered by __________. (fill in the blank)
(a) Higher wages.
(b) Government intervention.
(c) Private investors.
(d) Leaving the markets alone.

13. The Victorian period marked the beginning of what important movement?
(a) Socialism.
(b) Communism.
(c) European imperialism.
(d) American democracy.

1. Marx and Engels thought the revolution would occur in an advanced industrial economy like _________. (fill in the blank)

2. Keynes defines prosperity and depression in terms of what?

3. In what year did Keynes publish his Tract on Monetary Reform?

4. What did Schumpeter call a person who introduced change into economic life?

5. What did Marx's father hope he would study?

More summaries and resources for teaching or studying The Worldly Philosophers.