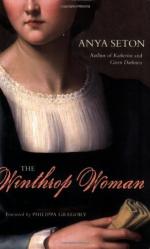 Anya Seton
This set of Lesson Plans consists of approximately 141 pages of tests, essay questions, lessons, and other teaching materials.

1. How does Bess pass her time at Groton?
(a) She learns needlework and works on many projects.
(b) She has an affinity for outdoor sports.
(c) She becomes interested in gardening.
(d) She mixes medicines and treats the servants and tenants.

2. What personal information does Bess give to Jack?
(a) Bess misses her mother.
(b) Bess cannot stand her mother-in-law.
(c) Bess is pregnant.
(d) Bess does not love Harry.

5. With whom has John Winthrop arranged a marriage for Bess?
(a) William Congreve
(b) William Falter
(c) Robert Seaford
(d) Robert Feake

6. What do the Fones children think of their uncle?
(a) He bores them with his interminable praying.
(b) He is playful and loves spending time with them.
(c) He is very intelligent and reads stories to them.
(d) He is an outdoorsman and teaches them how to ride horses.

8. Who is Bess' surprise visitor?
(a) Her best friend, Sara
(b) Her fiance, Edward
(c) Her cousin, Harry
(d) Her sister, Martha

10. When does John Winthrop decide he is going to emigrate to the new world?
(a) When his mother dies
(b) After a meeting of Parliament
(c) When his business fails
(d) During a meeting at Lincolnshire

11. What news does Bess deliver to her father that makes him hit her with a stick?
(a) That she has never loved her father
(b) That she wants to move to Barbados
(c) That she and Harry wish to be married
(d) That she is pregnant with Edward's child

14. Of what crime has Peyto been accused?
(a) Being a witch
(b) Stealing from the Winthrops
(c) Playing cards on Sunday
(d) Drinking too much rum

15. Why does King Charles celebrate Christmas?
(a) Because he celebrated as a child.
(b) Because his wife is a papist.
(c) Because he thinks people need a holiday.
(d) Because he enjoys the food.

1. What was Elizabeth's mother's maiden name?

2. How has Bess' behavior changed since Harry and Robert have moved into the Fones house?

3. What does Bess do to lift the spirits of the Groton villagers?

4. What happens when John Winthrop's iron-fisted style of leadership creates huge opposition in the colony?

5. Who is Elizabeth excited to see at the estate in Groton?