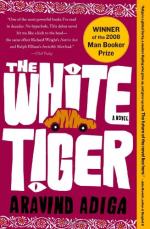 Aravind Adiga
This set of Lesson Plans consists of approximately 143 pages of tests, essay questions, lessons, and other teaching materials.

This quiz consists of 5 multiple choice and 5 short answer questions through Section 8.

3. Who is the mother-goddess whose image is described on the dashboard of the car in “The Fourth Night”?
(a) Savitr.
(b) Ratri.
(c) Kali.
(d) Mitra.

5. What does Balram describe as "the three main diseases of this country" in “The Fourth Morning”?
(a) Television, cancer, and tuberculosis.
(b) Typhoid, cholera, and election fever.
(c) Tuberculosis, maleria, and hunger.
(d) Poverty, corruption, and politics.

1. What brand of whiskey do Balram and Ram Persad purchase for the Stork's family weekly?

2. What does the goddess Lakshmi represent to Hindus?

3. What is the name of Balram's grandmother?

4. What is the name of the Stork's elder son?

5. How much money is in the envelope that Pinky Madam gives to Balram at the airport?