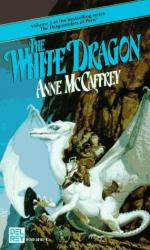 Objects & Places from The White Dragon

This is the second oldest hold on Pern, currently ruled by a guardian until its Lord comes of age.

This is a planet with a deadly atmosphere and where Thread comes from.

This is where the story takes place and is the third star of Rukbat's five planets and has two natural satellites.

These objects were believed to be a trio of stars, but are later discovered to be man-made objects hovering in the sky.

This is the rock dragons eat to create the flame they use to fight off Thread.

This is a space of nothingness that dragons and riders use to travel from place to place.

These are small spores that fall on Pern from the Red Star and devour everything organic that they touch.

This is usually the rider of a bronze dragon who...